When Charlie Came Back

It was in 1952 that U.S. Attorney General James McGranery waited until the Chaplin's had sailed for England that he pulled their re-entry permit. McCarthyism, HUAC, and the powers in D.C. had declared that the man who had given so much to America was now a danger and no longer welcome. Hollywood remained silent.

Twenty years later, with the Red scare safely tucked away, Charlie was invited back for a special honor at the Oscars.  He had been living in Vevey, Switzerland.  He reluctantly agreed. First he stopped in New York for a screening of two of his films at Lincoln Center's Philharmonic Hall. Even Mayor John Lindsay presented him with a special award. Then he headed West to accept his honorary statuette in front of a cheering Hollywood audience. He looked frail, unsteady, but still tried to entertain the audience with a small bit with his hat. Afterwards he returned to Vevey where he lived out his final years. 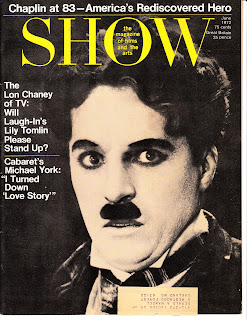 Shortly after he left, SHOW magazine published an article about him, written by William Wolf. He talked about the shock of seeing Chaplin in old age. Even Chaplin remarked, "My pins aren't so good any more," referring to his legs. Wolf interviewed Charlie at Manoir de Ban shortly before he left for the U.S. Here are some of Chaplin's remarks which I've pulled from the interview. 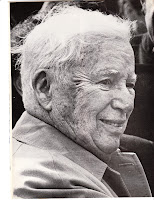 "I don't think (today's movies) stack up to mine. I'm very frank in saying that. They have no merit. They are silly and foolish, and if performers strip off their clothes - well, that's all right, but I would say that's what I object to about the modern movie. Any pantry sweetie can come in and take her clothes off, and she's interesting to the average audience. But I worked damned hard on the set to make a film, and everything I did was con amore, with my heart and soul, and with a terrific enthusiasm. I don't consider I'm a genius. Things come hard to me. I think they must come easier to other people.


"The FBI people asked why I followed the party line. I said, 'If you tell me what the party line is, I'll tell you whether I follow it or not.' They couldn't believe I wasn't a Communist. Oh yes, I was sympathetic to anybody who was hard up and needed help. That's all my politics ever got into."


He talked about "A King in New York."

"I didn't do it with any bitterness. It has a very good performance by my son Michael, and there's a lot of good stuff in that picture. If a picture gives the opportunity for invention, I'll take it, and I don't care what the hell the consequences are. We made fun of a lot of things, like progressive education, and the story naturally veered tgoward this young chap whom the FBI was trying to pressure to inform on his parents. But I wouldn't accept any ideas unless there was great comedy in it. I'm not  a pamphleteer. I had great fun, and that's the only thing I'm interested in."

Shortly before the interview was interrupted by the news that his young daughter, Annie, had broken her ankle in a skiing accident, Charlie talked about Mack Sennett.

"Mack Sennett was a great influence. I learned all of my comedy from him. He would laugh at the things I did, and I'd think well, that's not so funny, but he would think it was funny, and he gave me a lot of confidence. I enjoyed the old days in California when Thomas Ince as around, and when Sennett was around."


The author finishes up with these thoughts:
"His reputation stands on his films, of course, and not one's judgement of him as a person. But he did make a likeable impression, because the sense of humor was strongly there, he was gracious and hospitable, and he had a kind of elder statesman of the arts air about him. One quickly observed the strong ego people have long talked about....Within him seems also to be the longing to make yet another film, since he fights against accepting that his work, as great as it is judged to be, should stand completed."