After reading an article about Woody Allen in a magazine recently, I decided to watch some of his old movies. I checked out three from the library: “Hannah and Her Sisters,” “Crimes and Misdemeanors,” and “Sweet and Lowdown.” I love the Django-style music in that last one - and Sean Penn’s performance -, but I think “Crimes...” is one of his best. 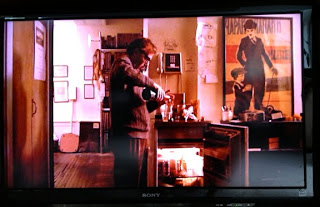 What caught my attention in “Crimes and Misdemeanors” (1989) was a quick shot of Woody in his apartment, talking to Mia Farrow. He walks into another room and on the wall behind him is a large poster of Charlie Chaplin’s “The Kid.” Not the usual studio produced poster but something that looked like an original work of art. I had the feeling it was Woody’s personal possession.

That started me wondering, “What is Woody’s opinion of Charlie? How does he view him as a filmmaker? What are his favorite Chaplin films?” And other questions. So I put on a documentary produced by Richard Schickel, “Charlie: The Life and Art of Charles Chaplin” (2003) and made some notes.

Here, in order, are some of Woody’s comments.

About the Mutual short “Easy Street”:
It’s a wonderful, wonderful short.
And because - it’ll always be funny.
It’ll be funny a thousand years from now.

“The Circus” is just a wonderful good time. The jokes and the execution of them are so brilliant and so uncluttered by anything that can date it. Social ideas and satire on the mores of the time date all the time. His stuff is so beautifully done, and it’s as fresh as can be.

“City Lights”:
I often said it’s harder being a talking comedian on the screen than a silent comedian. The example I gave was the difference between chess and checkers.
It’s like checkers, to do it silently, you can figure out the gags and painstakingly write them and then execute them, but as soon as you have to speak you’re plunged into a reality that’s much more complex and the demands become much different. 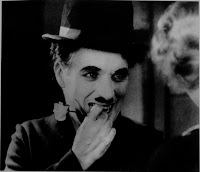 Then of course the guy with all the money who’s got all the possessions and
all the money in the world and is on the verge of suicide all the time because his feelings are unrequited in love... It’s such an interesting exploration of all those feelings, in a non-verbal way. It’s one step removed from music. For me, it’s his best picture. I again am impressed that he was such a good actor as well because the serious side of that movie he handled with legendary brilliance. 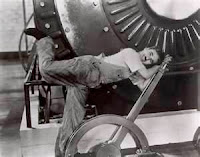 It is brilliant in following the story, and it kind of peters out, it doesn’t go anywhere. It’s just a brilliant trip and each skit is very funny and brilliantly executed and it goes along on the momentum of his genius, the fact that he’s funny and the bits are funny.

And finally, about “The Great Dictator”:
(Referring to the scene of Hynkel with the world as a balloon) People just fall down dead over an alleged metaphor but I don’t find it funny or a brilliant metaphor.  90% of America opposed war... one-half was to some degree anti-semitic. The film was courageous.

I found Woody’s observations on silent comedy versus spoken quite interesting. Those are two different worlds of humor. Yet, Woody and Charlie are possibly America's greatest two filmmakers. So I didn’t stop with this documentary. I checked out a couple of books about Woody and his films. He has a lot to say about Chaplin. I’ll cover some of that off in a future blog.

In the meantime, I’m waiting for someone to return “Manhattan” and “Stardust Memories” to the library.
Posted by Gerry Mandel at 8:22 PM