Charlie and Hetty: The Story Concludes 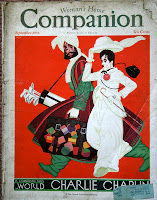 From A Comedian Sees the World in Woman’s Home Companion (Sept. 1933), this continues from my previous post. When we last saw the infatuated Chaplin, Hetty had left her troupe and gone to the Continent. Charlie said goodbye but left us with a cliff-hanger: “...the next time we met was in a curious way.”

As Charlie tells it,
“I was crossing Piccadilly when the screech of an automobile made me turn in the direction of a black limousine which had stopped abruptly. A small gloved hand waved from the window. There must some mistake, I thought, when a voice unmistakably called, ‘Charlie!’

“As I approached, the door of the car opened and there was Hetty beckoning me to get in. She had left the troupe and had been living on the Continent with her sister. Oh, yes, her sister had married an American multimillionaire. All this as we drove along.”

They exchange some pleasantries about how they’ve spent the past two years, and Chaplin says, “I think I shall try my luck in America.”

Hetty responds with, “Then I shall see you there.” She adds, “You know I’ve thought of you a good deal since the old days.”

We’ll never know whether or not Hetty actually said this, but if that’s what Chaplin remembered, or wished had happened, then so be it. I hope it’s true. Hetty leaves the following day for Paris and Charlie leaves for America and, eventually, Hollywood. While there, he hears that Hetty is in New York.

“I  had arrived in New York to sign million-dollar contracts. Now is my opportunity to meet her, I thought, but somehow I cannot do it normally. I couldn’t go to her house or send a letter. I am too shy. However, I stayed on in New York hoping to meet her accidentally.”

He finds out from her brother that she has married and is living in England. Charlie immediately returns to his work in Hollywood, trying to forget her. Months later he receives a letter from her. “If you ever come to London,” she wrote, “look me up.” Which is what Chaplin does a few months later, after he completes the picture he is working on. He arrives in Southampton to a tremendous reception. Hetty’s brother, Sonny, is there on the dock, waiting for him. They climb into a carriage and head for the hotel.

“Sonny and I were alone in the carriage. I hadn’t noticed until then. There was something strange about his appearance. As usual, he avoided any mention of Hetty. There was a pause in the conversation. I looked out of the window at the revolving panorama of green fields. At last I ventured to remark: ‘Is your sister Hetty in town?’

“‘Hetty?’ he said quietly. ‘I thought you knew. She died three weeks ago.’”

“I was prepared for every disappointment but this. I felt I had been cheated out of an experience and my holiday had suddenly become aimless...My success I had looked upon as a bouquet of flowers to be addressed to someone and now the address was unknown.

“So I have made up my mind not to be disappointed this time. It is dangerous to depend too much on people. They grow up and become other persons or pass out of our lives.”

He concludes this section of his story with,
“London, I feel, will remain the same. What little change has taken place will not affect my general impression and if I can capture some fragments of my youth I shall feel simply rewarded.”

Some fragments he would never capture. This meeting probably took place in 1918.  Hetty had died that year as the great flu epidemic swept Europe and much of the world. Estimates on the number of victims range from 20 million to over 50 million. To close the book on this chapter of Chaplin’s life, the original theater where Charlie and Hetty first met was destroyed by one of Germany’s “flying bombs” (a V-1 or V-2) in 1944.