37 Years Ago on Christmas Day

This Christmas, 2014, will mark the 37th anniversary of the death of this great film artist. Like his life and many of his films, the event held a surprise and, eventually, a happy ending. 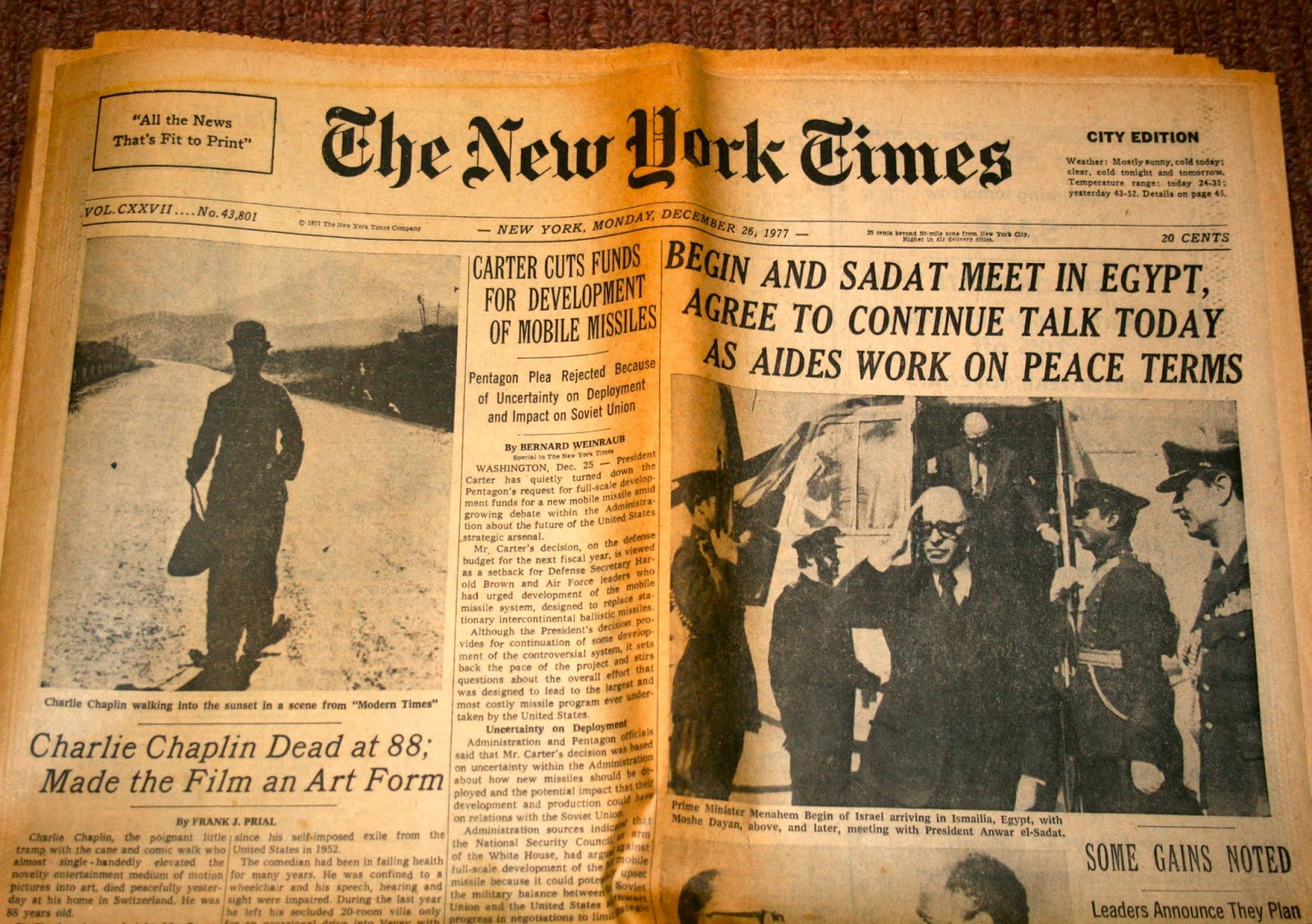 Charlie died early in the morning on Christmas, at Manoir De Ban, which overlooks the town of Vevey, Switzerland. He had been in declining health for awhile, though he never lost the urge to make one more movie. He was buried near the Manoir.

End of story? No. Three months later, in March of 1978, his body was unearthed and stolen. A ransom note demanded payment. The body-snatchers bungled the job, left a lot of clues.It sounds like one of his early shorts. The body was discovered in a farmer's field, the police caught the robbers, they stood trial, and Chaplin was buried in a more secure manner. This was in a cemetery in Vevey, in a concrete tomb, to eventually be joined by Oona in 1991. Oona's final years were quite sad as she withdrew from the public. 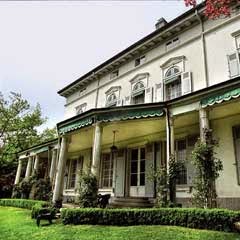 According to current plans, the Manoir is scheduled to open as a museum in Spring, 2016, an event long anticipated.


I visited their gravesite several years ago. It's in a small cemetery, surrounded by low walls, and open to the public. It was a hot day in July, I was alone there, and sat on the bench of front of their headstones for several minutes. I thanked him. 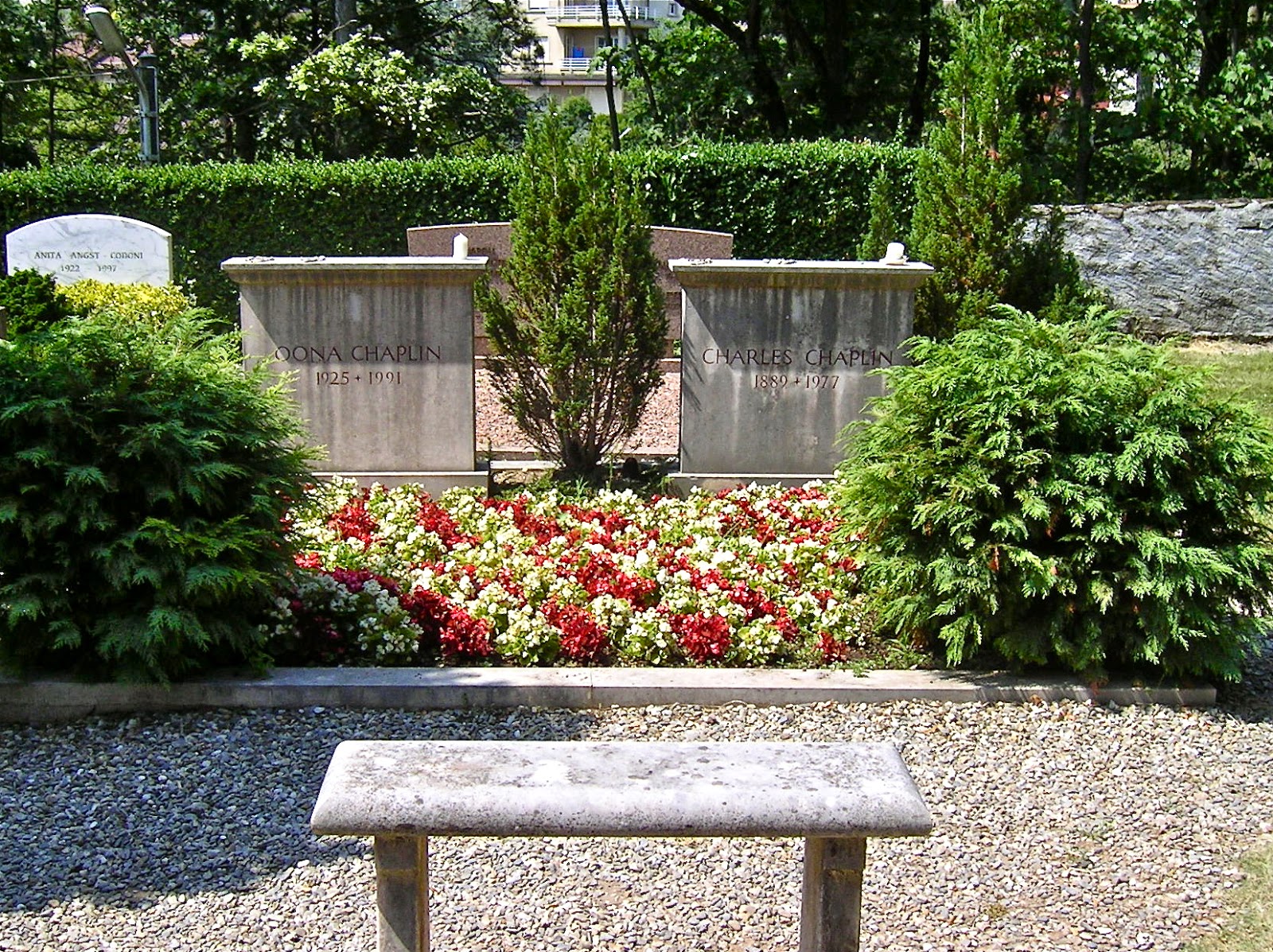 So, on Christmas day, amidst the presents and laughter and decorations and gathering of friends and family, perhaps you can pause for just a few seconds to say, "Thanks, Charlie. You brightened up my life, and the world." 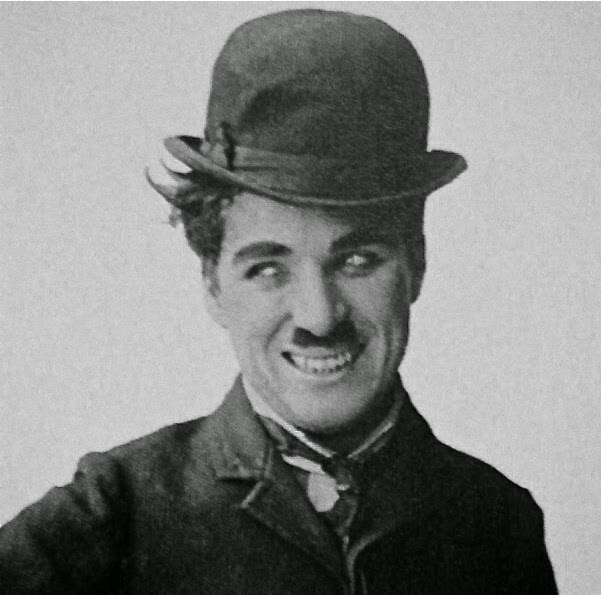 Seth Puts Charlie in the News

The Riverfront Times is a weekly newspaper in St. Louis that is more contemporary and edgier than our daily St. Louis Post Dispatch. Which is why I pick it up whenever I can. It's a freebie. Seth Rogen's new movie, "The Interview," doesn't really interest me, but the uproar it has created... actually an international crisis, if you believe the media... I find fascinating. 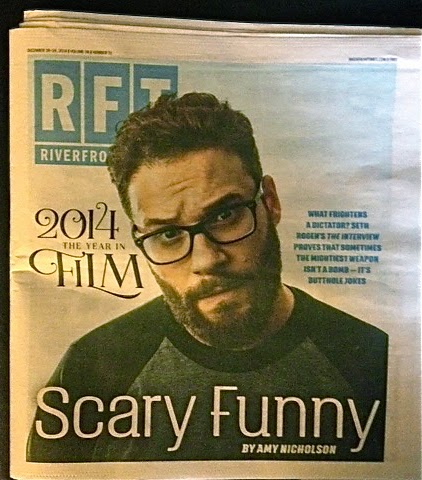 What made this article even more fascinating, when i turned to page 13, was the photo of Chaplin as Adenoid Hynkel in "The Great Dictator." Tales of courage and conviction in Hollywood are few and far between. Like finding melody in rap.

I wanted to share with you that portion of the RFT article that talks about Chaplin. 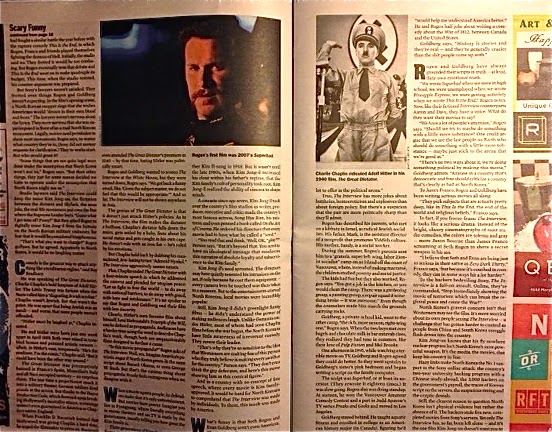 "Comedy is the greatest way to attack anything like a totalitarian regime," said Ray Bradbury. He was speaking of "The Great Dictator," Charlie Chaplin's bold lampoon of Adolf Hitler. The Little Tramp was furious when the Nazis called him a "disgusting Jewish acrobat." Chaplin wasn't Jewish. But that wasn't the point. He was upset that being Jewish was an insult - and worse, that more people weren't offended.

"Hitler must be laughed at," Chaplin insisted.

He and Hitler were born just one week apart in April 1889. Both were raised in troubled homes and pursued artistic careers — albeit, in Hitler's case, temporarily. "He's the madman, I'm the comic," Chaplin said. "But it could have been the other way around."
The Great Dictator was preemptively banned in Franco's Spain, Mussolini's Italy and all Nazi-occupied territory — no surprises there. The one time a projectionist snuck it into a military theater, German soldiers fired pistols at the screen. But thanks to the Hayes Production Code, which frowned upon breaking Hollywood's neutrality stance, screenings weren't even guaranteed in America or Chaplin's native England.
When Franklin D. Roosevelt learned that Hollywood was giving Chaplin a hard time, he urged the filmmaker to press on. Roosevelt even attended The Great Dictator's premiere in 1940 — by that time, hating Hitler was politically smart.
Rogen and Goldberg wanted to screen The Interview at the White House, but they were turned down, Rogen says. "We got back a funny email, like, 'Given the subject matter, we do not feel that this would be appropriate.'" And so far, The Interview will not be shown anywhere in Asia.
The genius of The Great Dictator is that it doesn't just attack Hitler's policies. As in The Interview, the film makes the dictator a buffoon. Chaplin's dictator falls down the stairs, gets soiled by a baby, frets about his social status and gets caught in his own cape. He doesn't rule with an iron fist — he's ruled by his emotions.
But Chaplin held back by dubbing his mustachioed, Jew-hating tyrant "Adenoid Hynkel."The Interview aggressively names names.
Plus, Chaplin ended The Great Dictator with a four-minute speech in which he addressed the camera and pleaded for utopian peace: "Let us fight to free the world — to do away with national barriers, to do away with greed, with hate and intolerance." It's no spoiler to say that Rogen and Goldberg end their film with less sincerity.
Clearly, Hitler's own favorite film about himself, Leni Riefenstahl's Triumph of the Will, can be defined as propaganda. Audiences have a harder time using the word to describe Chaplin's work, though both are unquestionably films designed to further a cause."

The rest of the article talks about Rogen, the movie, and N. Korea.
But here we are, just a couple of days away from the 37th anniversary of the passing of Chaplin, and he is as alive and relevant as ever. In this case, maybe more so, given the added weight of time and circumstance. The world in 1940 was headed towards complete chaos, already immersed in it in Europe. The studio heads in Hollywood backed off from implicating the Nazis and Germany's aggression for fears of losing foreign markets and stirring up anti-Semitism in the U.S.
One man was unafraid.
Posted by Gerry Mandel at 10:16 AM 4 comments: