Here are some more observations by Charlie's favorite cinematographer, Roland Totheroh. This is from an interview he did with Timothy Lyons in Film Culture in 1972. Chaplin was an undisciplined film maker, but maybe that's what went into his genius.

Roland Totheroh:
"Pretty near everything prior to The Great Dictator was ad lib. He didn't have a script at the time, didn't have a script girl or anything like that, and he never checked whether the scene wasin itsright place or that continuity was followed. The scriptwould develop as it went along. A lot of times after we saw the dailies the next morning, if it didn't warrant what he thought the expectation was, he'd put in some other sort of a sequence and work on that instead of going through with what he started out to do... In a lot of his old pictures, he'd make that separation by using titles about the time: 'next day' or 'the following day' or 'that night' - these would cover the script gaps in-between.

"He didn't want people to think that he didn't know what he was doing. He'd turn around and think overnight. 'Jesus Criminy, this is what I should have done. I didn't do it.' Now he'd dismissed all the people and had sets torn down. But, it was his own money, so what the deveil - 'Call the people.' He'd look for some excuse, something wrong, somebody else to be at fault for it; he'd have to call them down. You'd breakany company the way he'd shoot. Of course, it was his own money. But the way he shot the scene over and over he'd wear out all the actors and actresses. But he was patient with everyone who was acting. Even though, he'd confuse them by doing something so many times and so many different ways, they got so they didn't know which way they'd done it at any one time. Lydia Knott in Woman of Paris - he wore her out. Finally she said, 'Oh, Mr. Chaplin, please tell me what I'm doing wrong and what you want. I'm worn out. I don't know what to do.' He said, 'You're doing all right, it's just some little thing I want you to do.'"

The Man Who Shot Charlie Chaplin

If you're a fan of Charlie, then you know the name Roland Totheroh and that he was Chaplin's principal cinematographer from 1916 to 1952. He was relegated to the position of advisor for the filming of "The Great Dictator" in 1939-40. Until then, he and Charlie worked together on over 30 films. 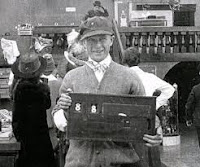 I recently came across an interview that Totheroh did with Timothy Lyons in Film Culture (1972).
Here is an excerpt from it, where he recounts how Charlie developed his ideas.

"When Charlie was working on an idea, often he would call me in. There were always a lot of his own people around. He'd hit on a certain situation where there was something he was building on and he'd want conversation more or less. And there'd always be someone there to write things down. Every time he'd speak, 'Put it down. Don't lose it. We'll go back to that, I'll lose my train of thought.'  He'd dictate so darn many things that, unless you're pretty clever and keep them in sequence, you could lose it easy. 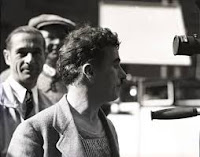 "But the basic idea on all his films would often change; it did on pretty near everything we took. After running with the dailies, then he'd be inspired and it would give him another idea, another thought. If not, he'd throw it out and do it from another angle. sometimes after a set had been torn down, he'd get a new idea and we'd have to reconstruct the whole set exactly as it was before so that he could reshoot some shots for a scene."

So far, I have been unable to find a biography of Roland Totheroh. If it hasn't been written, then it certainly deserves to be.

Posted by Gerry Mandel at 1:51 PM No comments: