A living connection to Chaplin's 1921 "The Kid"

An 8 x 10 manila envelope arrived in the mail last week. It was from an internet acquaintance named Steve Cox, who lives in Burbank, California. Steve and I have been in contact for a couple of years now, on matters that include Charlie, The Wizard of Oz and Margaret Hamilton, the Three Stooges, and other important issues of yesteryear. Here's a link to his "Oz" book. Munchkins of Oz

He had told me he was sending me "something pertaining to Chaplin," but gave no hint.

I opened the envelope. This is what was enclosed. A photo collage Steve put together. A signature, in blue ink, was by someone I had never heard of. Silas Hathaway. But I had seen Silas, in Charlie's "The Kid." Silas was the little baby that Charlie finds in an alley, thus beginning one of the most touching and entertaining movies Chaplin ever made, and his first feature-length film. 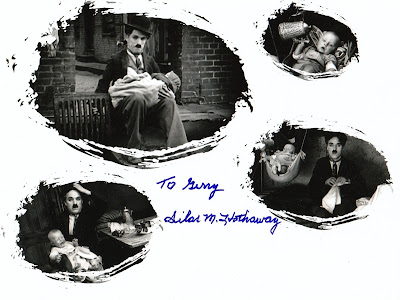 Silas Hathaway, as of this writing, is still alive, living in the Los Angeles area. He is 97 years old but in failing health. Steve met him last year and had him sign this for me.

Silas was born in 1919, the year Charlie began shooting "The Kid." Steve says he obviously has no recollection of the filming. But he did have his original work release card issued by the Chaplin studio for his one month work in 1919. Chaplin released the film in 1921 to great acclaim. And what happened to Silas? I have no idea. He may have been a one-hit wonder. But the wonder of it all is the connection that exists to this day between "The Kid" and the little baby in Chaplin's lap.