HE LEFT US LAUGHING, 38 YEARS AGO

On Christmas day of 1977, I was sitting on our living room floor, playing with my daughter and son, newly unwrapped presents strewn about the carpet, when Mary Lee said there was a phone call for me. My mom was on the line. Probably just wants to wish us a Merry Christmas, I thought.

That's how I learned that Charlie Chaplin had died that day. He was at his mansion in Vevey, Switzerland, with most of his children and grandchildren and, of course, his wife Oona. That night he passed away in his sleep. I felt a sense of loss, having been a Chaplin fan for several years, even to the point of bestowing the middle name "Chaplin" on my son Gregg. (My daughter's middle name is "Michelle," named for a favorite Beatles song. So much for family tradition.) 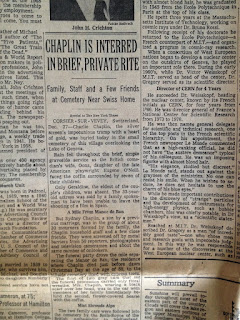 This past week, while going through some "stuff," I came across a storage container stuffed with lots of Chaplin items: magazines, newspapers, photos, videotapes, press kits, etc etc. What I want to share with you today are two items from the New York Times, dated Dec. 28, 1977. The first is a news item about Charlie's funeral. Dateline is Corsier-Sur-Vevey, Switzerland. It begins: "Charlie Chaplin, the silver screen's impecunious tramp with a heart of gold, was buried today in the small cemetery of this village overlooking the Lake of Geneva.

"Rain fell throughout the brief, simple graveside service as the British comedian's wife, Oona, daughter of the late American playwright Eugene O'Neill, faced the coffin surrounded by seven of their children."
The article goes on to describe the events of the ceremony.

Across from this article was an editorial. Which is what I really want you to read. 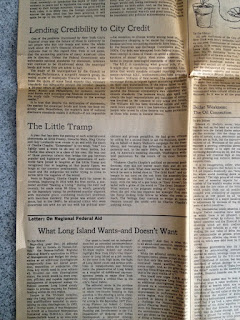 A year that has seen the passing of such entertainment phenomena as Elvis Presley, Groucho Marx, Bing Cosby and Guy Lombardo now comes to an end with the death of Charlie Chaplin. "Entertainer" is too weak, "star" too lightly used a word to do any of them justice, but Charlie was always in a class of his own. His was one of those precious talents that bridge the gap between popular and highbrow art. Three generations of audiences have joined in laughter at the Little Tramlp and recognized that in laughing at that jaunty figure, we laugh at our common predicament, the commotion we cause and the indignities we suffer trying to come to terms with the vagaries of the world.
Born in England, Charlie Chaplin build his career in America, beginning in 1914 with his first movie, a one-reeler entitled "Making a Living." During the next half century, he made some 80 films, in which, generally as the legendary tramp, he performed popular slapstick with inimitable grace, combining music-hall sentiment with merciless mockery. The praise was almost unanimous, but in the 1940's, he attracted critics who were concerned not with his art but with his political associations and private peccadilloes. He had given offense by calling for a second front to aid the Russians, speaking on behalf of Henry Wallace's campaign for the Presidency, and becoming the defendant in a sensational paternity suit. In the early 1950's, he went to Europe and, to America's enduring discredit, Washington withheld permission for the return of its most famous alien.
Whatever Charlie Chaplin's political or personal predilections, they did not matter much then and do not matter at all now. What does matter is the finesse with which he eats a boiled shoe in "the Gold Rush" and attempts to eat corn on the cob from the assembly-line food-feeder in "Modern Times"; his triumph over the bully, with the help of a gas lamp, in "Easy Street"; his ballot with a globe of the world in "The Great Dictator." What matters is the poignant ending of "City Lights," when the girl who has regained her eyesight first sees the funny looking little fellow to whom she owes so much. The feelings they continue to evoke in movie theaters around the world will be Charlie Chaplin's undying eulogy.

So here we are, almost four decades later, and Charlie still makes people laugh - and cry - on screens and walls and, yes, even iPads and laptops, around the world. His movies continue to be digitized, cleaned up, re-scored, and reissued continually. A newly restored edition of "The Kid," his first full-length feature, from 1921, will be released early next year.

This Christmas day, in between the presents and the parties, perhaps you might take just a moment to think about how important laughter is to the world, now more than ever, and to remember the man who made so many of us laugh, for so long. 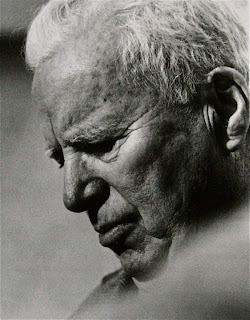 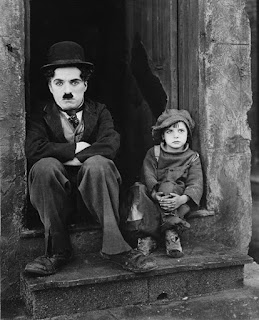