A divided America. Certainly this describes our condition today. Other similar times? Two come quickly to mind: the Civil War (aka The War Between the States) and Vietnam. A third has been added to my list, thanks to a new book by Lynne Olson, which gave me a sense of just how divided we once were. "Those Angry Days: Roosevelt, Lindbergh, and America's Fight Over World War II" covers 1939, 1940, and 1941... the slow run-up to our eventual participation in World War II. "Those Angry Days"

Before Pearl Harbor, America was torn apart by two committed factions: The Interventionists and The Isolationists. Essentially, the issue was should we become involved in the European war, take a stand against Hitler, rescue Britain; or should we secure our own shores, strengthen our defenses, turn our back on England and Europe?

Charlie Chaplin took a stand during those years, and followed it with his most profitable film to date.

Olson's book paints a vivid picture of FDR, Charles Lindbergh, Winston Churchill, and a supporting cast of colorful players on both sides. She even includes events in Hollywood. It seems, with few exceptions, none of the studio heads wanted to touch the subject of the Nazis or German aggression. For two reasons: Most of the studio moguls were Jewish and didn't want to stir up any more anti-Semitism than already permeated the U.S.; and they didn't want to lose overseas box office revenue. I'm not sure which one was the deciding factor.

The first film out of Hollywood to tackle the subject was "Confessions of a Nazi Spy" in 1939, starring Edward G. Robinson and produced by Warner Brothers.  A year later, another film also named the enemy and the danger. "Foreign Correspondent" starred Joe McCrea and Laraine Day. Alfred Hitchcock directed, Walter Wanger produced, and United Artists distributed (the company Chaplin helped found).

Hollywood remained silent. But not Chaplin. Supposedly, a chance remark prior to these years by Alexander Korda suggested that Charlie's Little Tramp bore a striking resemblance to Adolph Hitler. It isn't my purpose to recount the long road from concept to release of The Great Dictator in October of 1940. Much has been written about this subject, including a rather incredible book, "Chaplin: The Dictator and the Tramp," edited by Hooman Mehran with articles by him and several noted Chaplin academics. Unfortunately, the British Film Institute - the publisher - printed only 500 of these important books. Which means a used copy of this paperback on Amazon will cost you $50 on up. Still, it's a valuable addition to the Chaplin lexicon. Chaplin: The Dictator and the Tramp

Chaplin, in his autobiography, says, "Halfway through making 'The Great Dictator' I began receiving alarming messages from United Artists. They had been advised by the Hays Office that I would run into censorship trouble. Also the English office was very concerned about an anti-Hitler picture and doubted whether it could be shown in Britain. But I was determined to go ahead, for Hitler must be laughed at. Had I kown of the actual horrors of the German concentration camps, I could not have made 'The Great Dictator;' I could not have made fun of the homicidal insanity of the Nazis. However, I was determined to ridicule their mystic bilge about a pure-blooded race." 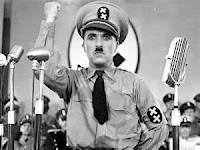 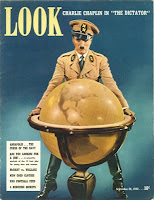 Chaplin's courage added another dimension to the stature of this unique artist.

Chaplin's final speech in the film, when he speaks directly to the camera, has its supporters and detractors. When I first saw the film, I was uncomfortable with the "stepping out of character" device. Since then, I've come to appreciate what he said and applaud its importance at the time. Final Speech in "The Great Dictator" 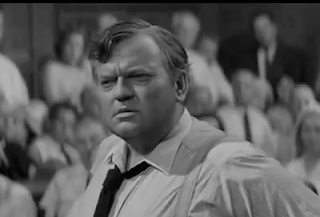 The other night I watched Compulsion, the 1959 film based on the Leopold and Loeb murder case. It starred Brad Dillman, Dean Stockwell and, as Clarence Darrow, a forcefulOrson Welles. The final summation delivered by Welles was based on a transcript of the original trial. I was struck by the similarity in message between that and Chaplin's final speech in The Great Dictator. They both spoke of love replacing hatred, people learning to live together.

Here is the conclusion of Welles speech.
"The world has been one long slaughterhouse from the beginning until today, and the killing goes on and on and on. Why not read something, why not think, instead of blindly shouting for death. Kill them because everybody's talking about the case? Because their parents have money? Kill them? Will that stop other sick boys from killing? No. It's taken the world a long, long time to get to even where it is today. Your Honor, if you hang these boys, you turn back to the past. I'm pleading for the future. Not merely for these boys, but for all boys, for all the young, I'm pleading, not for these two lives, but for life itself, for a time when we can learn to overcome hatred with love, when we can learn that all life is worth saving, and that mercy is the highest attribute of men. Yes I'm pleading for the future. In this court of law, I'm pleading for love."
Orson Welles in "Compulsion"

So what do you think?
Have we learned anything over the last several decades?