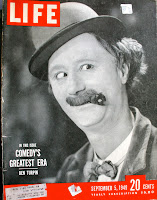 You never know what you’ll find in an old Life magazine. I was looking for an idea for this Chaplin blog, decided to dig through “my Chaplin stuff” and came across a 1949 issue of Life. The cover story: “Comedy’s Greatest Era.” Ben Turpin’s picture was on the cover. “Got to be something interesting here,” I thought.

The article is written by James Agee, one of America’s literary lights - a poet, journalist, film critic, and author of one of my favorite novels, “A Death in the Family,” published in 1957, which won the Pulitzer. I knew he was my kind of guy because, when they made the movie of the book,(titled "All the Way Home") a memorable scene between father and son takes place in a cinema where a Chaplin movie is on the screen.

Agee, as film critic for Time and The Nation, picked out “Four Master Clowns” for his tribute. Chaplin, Keaton, Lloyd - as expected - plus Harry Langdon. Langdon surprised me, mainly because I don’t know enough about him. But since my blog is about Charlie, I’ll get to him. In a minute. 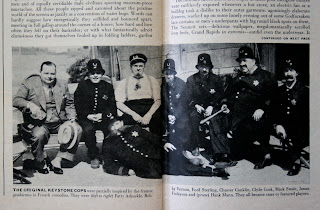 Take a look at where film comedy started - with Mack Sennett at Keystone. I’m fascinated by this picture of the original Keystone Cops. From the left, they are Roscoe Arbuckle, Bobby Venon, Ford Sterling, Chester Conklin Clyde Cook, Mack Swain, James Finlayson and Hank Mann. They would all be heard from beyond the Keystone beginning, most of them appearing in Chaplin films. 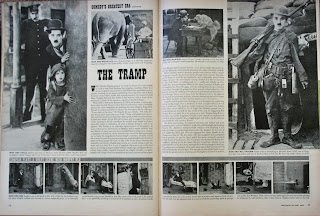 Agee began his analysis of "The Four" with Chaplin. He wrote,
“When Charlie Chaplin started to work for Sennett he had chiefly to reckon with Ford Sterling, the reigning comedian. Their first picture together amounted to a duel before the assembled professionals. Sterling, by no means untalented, was a big man with a florid Teutonic style which, under this special pressure, he turned on full blast. Chaplin defeated him within a few minutes with a wink of the mustache, a hitch of the trousers, a quirk of the little finger.”

Two years before this article was written, “Monsieur Verdoux” premiered, and Chaplin was hit by some vicious attacks on the film. Agee was one of the few members of the press who came to his defense.

Which may account why Agee is so lavish with his praise of Charlie in this 1949 article. “Of all comedians he worked most deeply and most shrewdly within a realization of what a human being is, and is up against. The Tramp is as centrally representative of humanity, as many-sided and as mysterious, as Hamlet, and it seems unlikely that any dancer or actor can ever have excelled him in eloquence, variety or poignancy of motion.”

Finally, he talked about that incredibly touching final scene in “City Lights.”
Agee said, “The camera just exchanges a few quiet close-ups of the emotions which shift and intensify in each face. It is enough to shrivel the heart to see, and it is the greatest piece of acting and the highest moment in movies.” 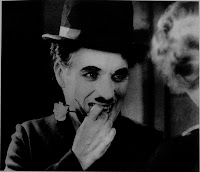 I agree with Agee, on all counts. About Chaplin, and about Comedy’s Greatest Era.
Posted by Gerry Mandel at 10:47 AM No comments: