HOW CHARLIE WORKED WITH HIS ACTORS 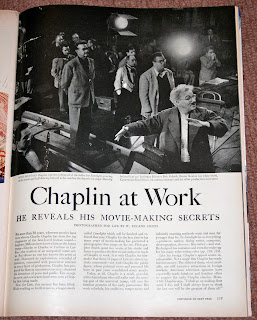 On March 17, 1952, about a month before Charlie’s 63rd birthday, Life Magazine ran a feature called “Chaplin at Work.” Subhead: “He reveals his movie-making secrets.” It was basically a photo essay showing him at work on Limelight. His secret seemed to lie in the method he employed working with his actors, along with his complete involvement in every aspect of making the film.

Ironically, this would be the last film that Chaplin made as a resident of the U.S. Just six months later, on Sept. 18, 1952, Charlie left the U. S., headed for London and the world premiere of “Limelight.” The following day U.S. Attorney General James McGranery revoked his  re-entry permit. Although Charlie could have fought it on solid legal grounds, he decided he would rather live in Europe.

In his autobiography, Charlie says:
"Whether I re-entered that unhappy country or not was of little consequence to me. I would like to have told them that the sooner I was rid of that hate-beleaguered atmosphere the better, that I was fed up of America's insults and moral pomposity.”

He would not return until 1972, to be honored at Lincoln Center in New York and at the Academy Awards in Los Angeles.

But about the article: The photos here reinforced what I had heard about Chaplin’s method of directing actors. Basically, it was to play their part for them, show them exactly what he wanted from them. For the first time in his career, Chaplin gave a photographer the freedom to spend 5 weeks on the set, shooting whatever he wanted.

Jeffrey Vance, in his book, Chaplin: Genius of the Cinema, says:
“From his first film to his last, Chaplin remained a man of the theater, and his primary concern was to convey to the audience the action and the emotion of a scene through the performances of his actors, not through innovative or elaborate photography, lighting, or editing. By any standard, Chaplin’s directing style, perfected during the filming of the Mutuals and employed throughout the rest of his career, was unique in the cinema. He simply acted out the parts of all the actors as he wished them to be played, down to the slightest gesture of the hand or movement of the eyebrow. Chaplin and his cast would be in full costume and make-up while he rehearsed scenes and refined ideas over and over again on film. This directorial style was considered eccentric even in 1916, and the time he lavished on his films was the envy of every filmmaker. Yet for Chaplin, a laser-like concentration on performance and perfection to the exclusion of all else was his unyielding obsession, even until the end of his career.”"Chaplin: Genius of the Cinema"
Kevin Brownlow, in his exquisite 1986 “Unknown Chaplin” documentary, clearly reveals the concentration and obsession with perfection that was so much a part of Chaplin’s genius. Unknown Chaplin DVD

I wondered what Charlie had to say about his directing style, so I revisited his autobiography. Here’s how he saw it:
“...Also a brief word about directing. In handling actors in a scene, psychology is most helpful. For instance, a member of the cast may join the company in the middle of a production. Although an excellent actor, he may be nervous in his new surroundings. This is where a director’s humility can be very helpful, as I have often found under these circumstances. Although knowing what I wanted, I would take the new member aside and confide in him that I was tired, worried and at a loss to know what to do with the scene. Very soon he would forget his own nervousness and try to help me and I would get a good performance out of him.

“....I do not believe acting can be taught. I have seen intelligent people fail at it and dullards act quite well. But acting essentially requires feeling.... In instructing a true actor or actress about a character, a word or a phrase will often suffice... I have found that orientation is the most important means of achieving this; that is, knowing where you are and what you’re doing every moment you’re on the stage....I have always insisted on this method of orientation with the cast when I’m directing my films.”

Fourteen years later, Chaplin would direct Marlon Brando and Sophia Loren in “The Countess from Hong Kong.” Though Chaplin thought the movie was among his best work, most critics did not agree. Here is what Charlie said about his actors, in a 1967 interview with Richard Merryman:

“Marlon Brando is an exceptionally good actor... There were a lot of things he did that I didn’t like - but, you know, they came off 100 percent. Very trifling things, but the sort that loom up to a director, especially for a person like me, I can act, you know, I can act.

“I don’t think either Brando or Loren understood the value of the script that it would work so well. I did. I’m an actor. I wrote it. When you’ve had fifty years experience, you know something about a script.”

Charlie the actor. Charlie the director. Charlie the writer.
I can only wonder what more he might have accomplished if he had not been forced from the U.S., or if he had decided to fight it and remained here. I wonder where his creative force would have taken him, in an era when silent movies were historic curiosities, when television invaded every home, when the very nature of “what is funny” changed. Yet, looking back at that Life article 63 years later, I am not surprised that his movies are still held in high regard, are shown in theater and festivals and on TCM consistently. Whatever his relationship with actors was, he knew what he wanted. And he got it.
Posted by Gerry Mandel at 8:46 AM No comments: