That might have been the headline almost one hundred years ago, especially if the writer was hung up on alliteration. Here’s the story behind the line. 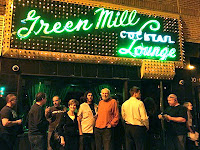 A rather ordinary, residential street runs east and west on Chicago's north side. It's Argyle Street, just a couple blocks north of Lawrence Ave. I mention this because I was in Chicago over the July 4th weekend. My wife and I, along with our son Greg (who lives in Chicago) and our daughter Holly, who was in from NYC, spent about two hours one night at The Green Mill, Al Capone's storied speakeasy and now a jazz club at Broadway and Lawrence. The band was Alfonso Ponticelli and Swing Gitan. That’s a name to remember if you like Django Reinhardt and Paris jazz. I do.

The following morning I started thinking about Charlie Chaplin's brief stay in Chicago, after he had signed with Essanay Pictures. By brief I mean a little over a month. Charlie had left Mack Sennett and Keystone in 1914 for a supposedly better deal from George Spoor and G. M. Anderson. Hence the "S" and "A."  They promised him a lot, but it took some time for them to deliver. In the meantime, Charlie moved to Chicago. Talk about bad timing. He arrived in December of 1914, just as winter was settling in. 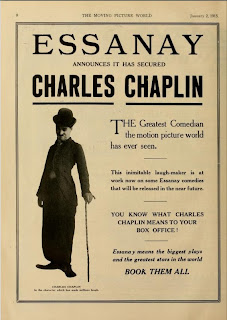 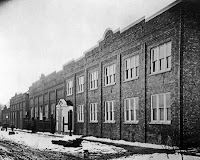 The Essanay Film Manufacturing Company had been in business for seven years before they signed Chaplin, for the unheard of amount of $1250 a week plus a signing bonus of $10,000. Charlie went to work on his first film, appropriately titled "His New Job." It would be his only film completed in Chicago.

Winter in Chicago, during January of 1915, would prove more than he could stand. In February, he packed up his few belongings and headed west to Niles, California, about 20 miles south of Oakland, where Essanay had another studio. Charlie didn't  care for the working environment at either place, but at least the temperatures didn't sink below freezing in Niles.

In less than a year, Chaplin would leave Essanay and sign with Mutual Films, to begin one of his most productive and satisfying segments of his creative life. What he accomplished at Essanay, however, was significant. He continued developing his “Little Tramp” character, refining it, getting a clearer picture of who the character was. He also met one of the most gifted comics of that time, Ben Turpin, who he convinced to move from Chicago to California. And he met Edna Purviance in San Francisco. Edna became, professionally and personally, an integral part of Chaplin’s life. So Essanay and Chicago, while a brief stopping point in his career, had significant long-term benefits for him.

Now comes the part under the heading of "Small World." Many years ago, in 1973, when I was working at D'Arcy Advertising, we had to shoot some cat food commercials for Ralston-Purina. The product was a small tin of meat for cats called Purina 95. That meant it was 95% meat, although I didn’t know, nor did I want to know, where the meat came from. For budgetary reasons, we decided to shoot in Chicago instead of L.A. The winning bid was submitted by Wilding Studios. The shoot took place - you guessed it - at the old Essanay Studios. It was now a rental studio for commercial production houses. I even remember the director's name. Lutz Hopke. He spoke with a heavy German accent. I always wondered what Lutz was doing 25 years before our meeting.

I could find no trace of Chaplin on the stage or in any of the offices and storage spaces I wandered through. Chaplin had left the premises over 50 years before this. Still, I was on hallowed ground that was slightly desecrated by cat food.

I now read occasional articles that attempts were made, are being made, will be made, to establish some sort of tribute or memorial to Chaplin at the 1345 W. Argyle address. I’ve even seen something about a Chaplin Theater in one of 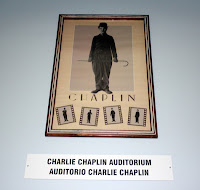 the buildings. The building today is owned by the St. Augustine College. The Chicago Tribune posted a fascinating video last year about Essanay. It runs only 5 minutes. Tour of Essanay Studios


So here I was last week, almost one hundred years after a young Charlie Chaplin got off the train in Chicago for a brief stint. I stood outside the gates of Essanay, beneath the terra-cotta Indian head logo. If it hadn't been a holiday weekend, and I could have entered the building, I know I would have picked up a trace of The Little Tramp. A shadow, a gesture, a twitch of the mustache, a flip of the derby, a twirl of the cane. Because, as we all know, some things never die. 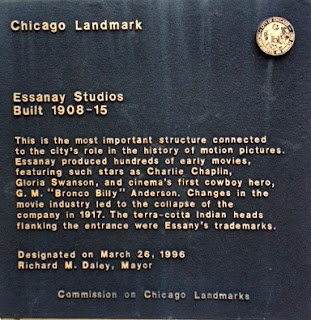 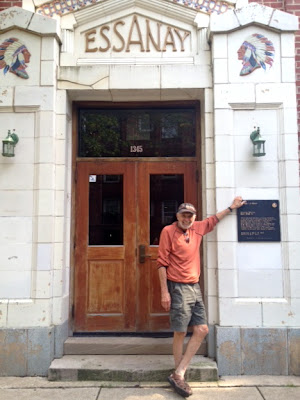