The idea of putting Charlie Chaplin, Mickey Mouse and Walt Disney in the same sentence never seemed like a possibility. Then I picked up my copy of Neal Gabler's impressive biography of Disney last week (signed, no less... by Neal, not Walt). That's where I discovered the connection between these three icons.

The following is lifted directly from Gabler's 2006 book. 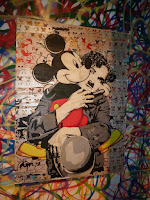 “…Maurice Sendak found an ‘anarchy’ and ‘greediness’ in Mickey’s grin, the ‘gleeful beam of a sexual freedom,’ and said that when he designed his own Wild Things for the book Where the Wild Things Are, he based his drawings on this lascivious Mickey.

“That lasciviousness tied Mickey Mouse to another motion picture icon: Charlie Chaplin. Nearly every analysis of the early Mickey invoked Chaplin and cited the correspondences between the two - their leering aggressiveness, their impertinence, their sense of abandon, and especially what film historian Terry Ramsay at the time called ‘the cosmic victory of the underdog, the might of the meek’ that they
shared. Walt himself was certainly aware of the similarities because he had consciously used Chaplin, whom he once called ‘the greatest of them all,’ as a model. In devising Mickey Mouse, he said, ‘We wanted something appealing, and we thought of a tiny bit of a mouse that would have something of the wistfulness of Chaplin - a little fellow trying to do the best he could.’ Ben Sharpsteen said that Walt was constantly screening Chaplin films trying to pinpoint Chaplin’s basic appeal, and another animator, Ward Kimball, recalled that Walt was ‘always showing us how Chaplin did a certain thing.’ ‘He just could’t get him out of his system,’ Dick Hummer said of Walt’s obsession with Chaplin. ‘Walt kept the feeling of this little droll kind of pathetic little character who was always being picked on. But cleverly coming out on top anyway.’ When Edward Steichen photographed Walt for Vanity Fair, Walt sent him a sketch of Mickey impersonating Chaplin. 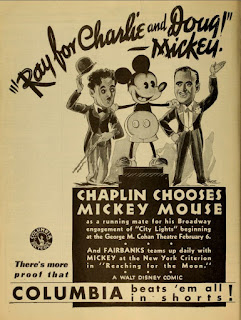 “But if Walt Disney had thought of Mickey Mouse as an animated surrogate for Charlie Chaplin, Mickey’s other father, Ub Iwerks, had thought of him in very different terms - as Douglas Fairbanks. ‘He was the superhero of his day,’ Iwerks said of Fairbanks, ‘always winning, gallant and swashbuckling.’ As for Mickey, ‘He was never intended to be a sissy. He was always an adventurous character… I had him do naturally the sort of thing Doug Fairbanks would do.’ Thus Mickey Mouse was born between two conceptions - between Chaplin and Fairbanks, between the scamp and the adventurer, between sympathy and vicariousness, between self-power itself. From the first he was an unstable creation, often veering from one pole to another, on one cartoon to the next.

“…..Mickey Mouse is in thrall to his own abilities of imaginative transformation. Whether he is turning an auto into an airplane or a cow into a xylophone, Mickey, like Chaplin and like Walt Disney himself, is always in the process of reimagining reality, and this is his primal, vicarious connection to the audience - the source of his power. He sees and hears things others don’t. He make the world his.”

Chaplin returned the admiration in the years ahead. In 1933, when Disney’s “Three Little Pigs” was released to great admiration, the Hollywood Writers Club honored Walt. “Chaplin, who rarely performed in public, climbed onto a small stage and did a pantomime in Walt’s honor.” 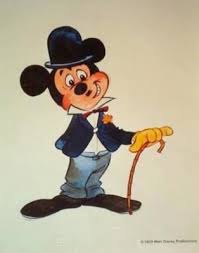 In 1936, Disney was negotiating a new distribution deal with United Artists, of which Chaplin was a founding partner. Chaplin said, “I don’t want to make any money on Walt, and anything I can ever do for him I will gladly perform.” However the deal fell through and the Disneys departed for RKO.

One note of irony here about animator Ub Iwerks comparing Mickey to Doug Fairbanks: Charlie and Doug were close friends. In fact, Charlie often said that Doug Fairbanks was his only true friend in Hollywood. It took Ub and Walt and Mickey to keep these two friends together forever.