Charlie and Jeff:The Good, the Bad, the Timely


A newsletter arrived in the mail today. Not email, but an old-fashioned, USPS delivered, 4-pager that you can hold in your hand, fold and put in your pocket, set a glass of iced coffee on it so the sweat won't leave a puddle. It's called Hightower LOWDOWN (all caps), and is written by Jim Hightower. No idea who he is. Didn't subscribe to it. Almost pitched it after reading the headline: "Like Walmart, only with supercomputers and drones: At Amazon.com, "cheap" comes at a very hefty price."

Not a subject I'm particularly interested in. Get depressed when I go to WalMart. Blame Amazon for running most of the independent bookstores out of business. The article fills the entire 4 pages. But then I read the opening sentence, some of it in bold type, and I reconsidered:

"IN HIS CLASSIC 1936 COMEDY, Modern Times, silent filmmaker Charlie Chaplin depicted the trials and tribulations of a harried factory worker trying to cope with the sprockets, cogs, conveyor belts, and managerial 'efficiencies' of the new industrial culture. The poor fellow continuously finds himself caught up (almost literally) in the grinding tyranny of the machine." 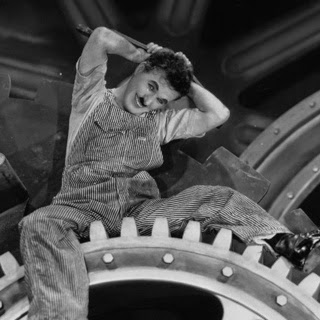 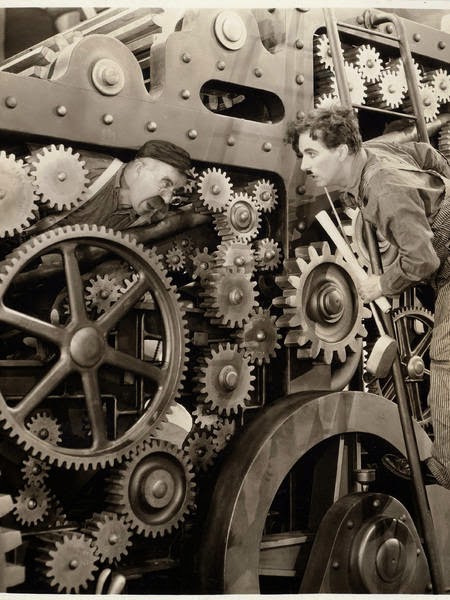 He goes on to call the movie "hilarious" while adding "it's also a powerful and damning portrayal of the dehumanizing consequences of mass industrialization... 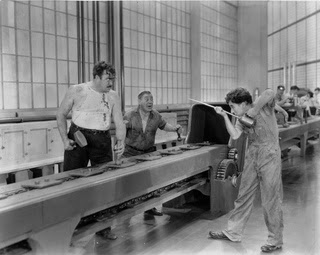 " and elaborates on that aspect of the movie. "Ruthless bosses." "Faster output." "Monotonous assembly-line work." You've probably seen the movie, so you know what he's talking about.

And you remember the contraption that force-fed workers as they worked. Charlie's hilarious scene with the bowl of soup, corn on the cob, and a piece of pie. 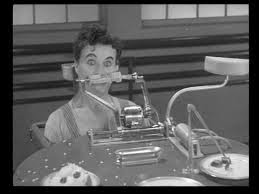 It's one of my favorite scenes in Modern Times. Especially considering how Chaplin accomplished the intricate timing on the contraption.

Finally, Hightower gets to the point of the comparison between the movie and Amazon:
"Of course, worker-feeding machines were a comedic exaggeration by the filmmaker, not anything that actually existed in his day, and such an inhuman contrivance would not even be considered in our modern times. Right? Well....if you work for amazon.com,Inc., you'd swear that Chaplin's masterpiece is Amazon CEO Jeff Bezos' idea of a properly run workplace."

The next 3 1/2 pages are basically an indictment of the way Bezos runs his company. I don't want to take up space on Time with Charlie Chaplin talking about how and why Amazon got to be the 10th largest retailer in the country. Much of it reads like a horror story, reminiscent of 19th century London or lower Manhattan garment factories in the 1920's. It's almost enough to make me throw away my Kindle. Almost.

At the end of the article, we return to Chaplin: "Reducing workers to Chaplinesque automatons in a rigid time-motion nightmare, however, is not the end of Bezos' reprogramming of work and workers. Why not just replace those pesky humans altogether?" 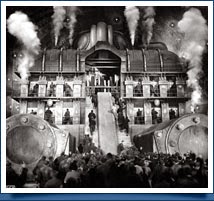 All of which makes me wonder just what Chaplin would have done with this scenario. Drones and robots and artificial intelligence and whatever else Bezos has in store for America. The more I think about it, the more it sounds like Metropolis instead of Modern Times. If you'd like to read the entire article, you can find it on www.hightowerlowdown.org.

Amazon, of course, is not alone in its corporate environment. They have plenty of company throughout the world. Today it's the documentary that attempts to expose and correct these situations. Back in 1936, Chaplin did it with comedy, with The Little Tramp, and with Paulette Goddard. 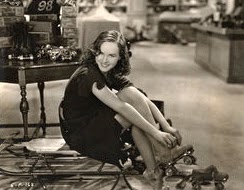 I'd just rather keep the two separate, continue to enjoy Chaplin and Paulette and the brilliant scenes and sequences, finally ending with an iris out as Charlie and Paulette walk away from camera into the distance and a promising future. 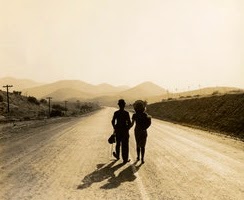 Now that's a happy ending, and I don't need a drone to deliver my next re-issue of Chaplin films.