A Different Kind of Christmas Memory


The world bid farewell to one of its great artists
on Christmas day of 1977.

I was a copywriter at Gardner Advertising at the time, having just finished two years of freelancing and enjoying the new security, or whatever passes for security in the ad business. Mary Lee was working as a rep for a food brokerage firm. My daughter Holly was nine, my son Gregg would be five on the following day. Their familiarity with Chaplin came from watching an occasional short of his on videotape, or walking into my home office. One wall was covered with framed images of Chaplin - posters, photos, a couple of paintings - but I had not yet been hit with the idea to write a novel about him.

On that Christmas morning,  I sat on the floor in the living room with my kids. Mary Lee was upstairs. We had opened the presents and I was probably in the middle of trying to assemble something or playing a game with the kids. The phone rang. My wife answered it upstairs. After a few seconds I heard her say, “I’ll tell him. Thanks, mom.”

She came downstairs and said, “That was your mother. She just heard that Charlie Chaplin died.” I’m ashamed to say that I don’t remember what all my feelings were. Loss, certainly. Sadness at the passing of a great film maker  and comic. I don’t remember if either one of the kids said or asked anything. But there was something else deep inside me. Something like “missed opportunity.” The proverbial road not taken. 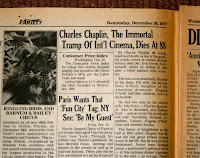 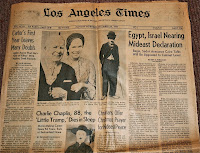 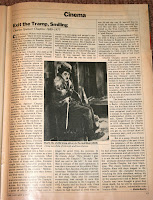 Here’s what I mean. I had been in Europe in 1960, had hitchhiked close to Vevey, Switzerland, where Chaplin lived. I considered trying to “stop by and meet the man.” Like walk up to the front door of the Manoir and say, “Is Charlie here?” But I didn’t. Turns out he was working on his autobiography at the time. Thinking back, I know I could have helped him write it, or just typed it for him (I'm a speedy typist), or taken out the trash or catalogued his films or whatever he needed done. The possibilities were endless.

Years later I thought about writing to him, before his return to America in 1972, to tell him he wasn't forgotten, he was still loved by many. I wrote the letter in my mind, but never committed it to paper.

For some reason, his passing fanned the low-burning fire in me, ignited a renewed interest in his life and art. It’s a passion that remains as strong as ever these 36 years later. Ebay has been a big help with that, as well as meeting many wonderful people along the way, people with a shared love of Chaplin. 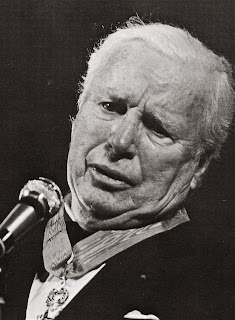 The point of this rambling is really to say this Christmas, as every Christmas, is special for me in more than just the ordinary holiday aspect of it. Which is why I’ve scattered some photos of Chaplin throughout this article, Chaplin in his later years, and how various newspapers announced his death. I put the newspapers into a large envelope 36 years ago, in the days before you could access every bit of history on-line. Old newspaper is more real than clean digital reproduction.

In summer of 2006, following a week-long bicycle journey in Denmark, we spent a few days in Zurich. On the second day we took a train to Vevey. A heat wave covered much of Europe during that week, the train was a local, and we arrived in Vevey early afternoon. 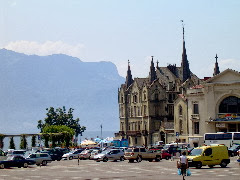 By the time I found out where to go and how to get around, it was too late to go to the Manoir. But I visited the cemetery. 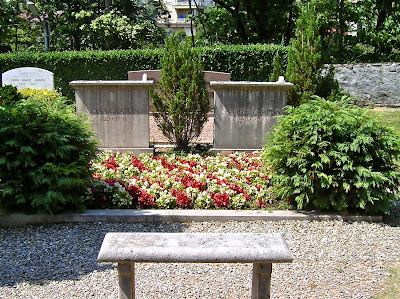 Charlie and Oona rest side by side there in this small, open sanctuary. I was alone. I sat on the bench, my shirt soaked with perspiration, and thought about all that Charlie had brought into the world, and all that Oona had brought into his life. Silence enveloped me. 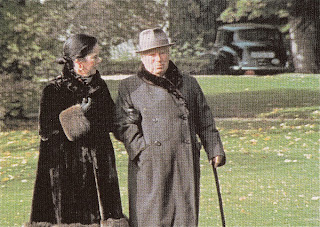 I thanked him, touched the headstones, thought about all the years that had passed since he had first entered my life, and walked back into town.

Charlie wasn’t the only bright star to go out that year. There was also Groucho and Bing and Elvis. But for me, the year 1977 has but one meaning: It was the year The Little Tramp kicked up his heels, faced the future optimistically, and walked down that road. Only he wasn't alone. He was with Oona. And the rest of the world was with him.