Jazz musicians used to get together, usually after hours, for jam sessions.
It was a thrill to see and hear these jazz greats sitting in with each other.

Charlie Parker and Miles Davis, Dizzy Gillespie and Stan Getz, Oscar Peterson and Lester Young. Guys who played with their own groups, but still enjoyed the challenge and stimulation of interplay.

What does this have to do with Charlie Chaplin? A lot, I believe. Charlie retained control of his films for most of his life. His final film here, in 1952, was Limelight. It was then, at the age of 63, that he decided to work with Buster Keaton. And that's what I can't understand. Why did it take so long for these two giants of silent film to get together in a movie? Surely someone must have had such an idea. 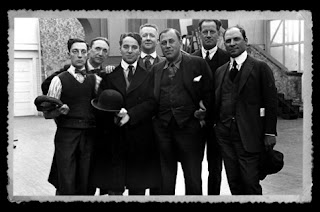 This year the focus is on Keaton and Chaplin. I'll be there, as I was last year when I learned to appreciate Keaton even more than I had before. Relatives of Keaton, friends, academics (or is it academicians?), an actor who worked with him, the head of the Association Chaplin in Bologna, Italy... they'll be there. I look forward to what they have to say about Buster and Charlie.

In the meantime:
Life Magazine ran an 11-page spread on "Chaplin at Work" in its March 17, 1952 issue. It contained a lot of photographs of the Limelight production, but only a couple show Buster. Here's a short paragraph from that article.

"Chaplin had carefully planned what to do in his dramatic scenes. But the comedy routines often had to be developed through trial and error and patient improvisation. The scene below with Buster Keaton, himself a star of the silent comedies, began with only the meager idea of a nearsighted pianist and an acrobatic violinist. The two, who had never appeared together before, spent a day of preparation in shirtsleeves organizing the piece of business which would form their act. With utter disregard of their ages (Keaton, 56, Chaplin, 63), they danced and tumbled, experimented, repeated. Over and over Chaplin twirled, tripped, rolled across the footlights into the orchestra pit where worried grips stood by to catch him. Time and time again Keaton staggered from the wings, crashed awkwardly into the piano and fell to the floor in a flutter of music sheets. Stagehands, dancers, musicians sat in bemused groups breaking into laughter, applauding as they watched a show no one else would ever see." 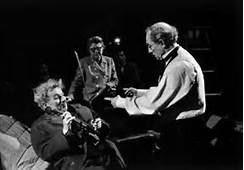 When I've watched Limelight, I'm struck by the number of single shots in what was essentially a duo performance. I prefer the shots where you see both of them on stage.  Instead of including both Buster and Charlie in the shot, Charlie frequently went to the single shots. I think that's a shame, considering that the appeal of this sequence is watching two of the greatest film artists working together.

David Robinson, in "Chaplin: His Life and Art," explains.
"Keaton worked on the film for three weeks.... It was a sweet gesture of Chaplin's to employ him: Keaton had not worked in comedy for years and was all but forgotten. He arrived, Jerry Epstein recalls, with the little flat hat he had worn in his own films, and had to be gently told that Chaplin already had a costume and business worked out for him. The whole unit was enchanted to see, however, that once on stage, Chaplin and Keaton became two old comedy pros, each determined to upstage the other.... Claire Bloom felt that 'some of his gags may even have been a little too incandescent for Chaplin because, laugh as he did at the rushes in the screening room, Chaplin didn't see fit to allow them all into the final version of the film.'" 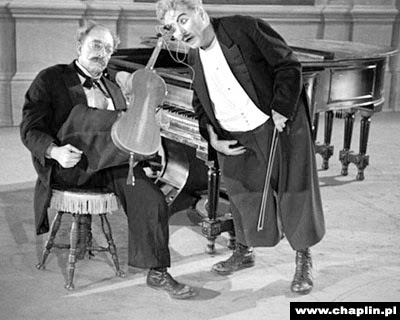 Of all the Chaplin out-takes and alternate scenes that have been uncovered and discovered, mainly by Kevin Brownlow, none - as far as I know - show all the magic and inventiveness that certainly occurred between Charlie and Buster during those three weeks. I wonder about Charlie's motives, especially since he did not see fit to mention Buster in his autobiography. But I shouldn't complain. At least he brought Buster in for these few glorious moments. Rather than wonder about what's been left unseen, better to fully appreciate the two greatest comic stars of the silent era.

The applause and laughter will ring forever. 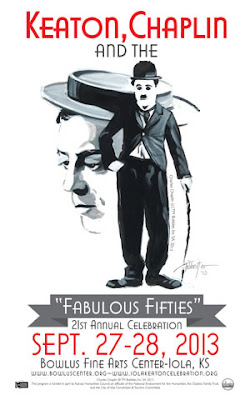