Time to Write a New Book

I've got an idea for a new book about Chaplin. This isn't easy. It seems just about every aspect of his life has been covered, many times over. It's almost in the same category as Abe. Do we really need another book about Lincoln? Still, authors find new angles.

That's not true of a biography I bought a couple of weeks ago, released in the United Kingdom, and containing nothing new. The author, Peter Ackroyd, has excellent credentials, but foremost among them must be the ability to read everyone else's books and stitch together pieces gleaned from their efforts. Which makes me wonder: Are there any new books to be written about Sir Charles? (I know of one in the process, by a friend of mine. She is on to a terrific idea but still has much work to do.)

So.... What's new? First of all, I immediately rejected the notion of "Charlie Chaplin for Dummies" and "Chicken Soup for the Little Tramp's Soul." He doesn't belong in a franchise collection.

Here are the six book ideas under consideration: 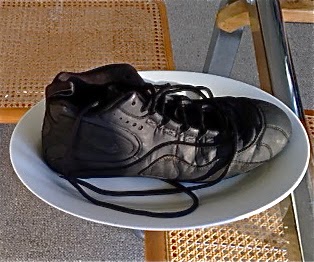 2) "The Lost Symphonies of Vevey." During his final 24 years in Vevey, Switzerland, Chaplin, it is rumored, wrote four symphonies.  The scores still exist. Because Chaplin wrote the music for many of his films, he still felt the need after 1966 to compose, so he attacked the longer form of symphonies. Each symphony is inspired by one of his wives. Particularly noteworthy is the "Lita in Hell" work. This book will contain a CD with performances of those lost symphonies. 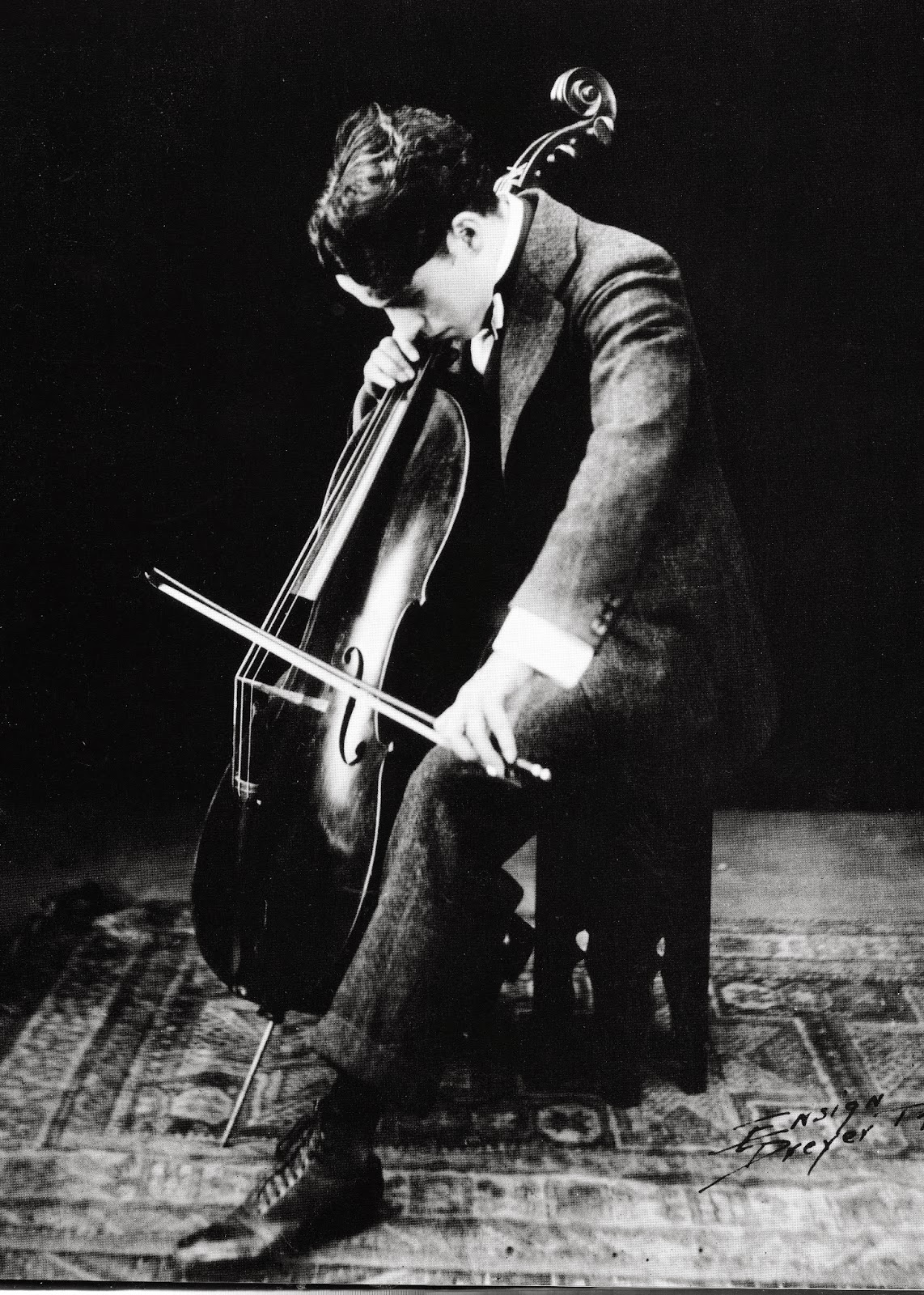 3) "Smile, Smile, Smile." The most famous song he wrote, from "Modern Times." This book contains profiles of every artist who ever recorded "Smile." A total of over one hundred. Includes vocalists such as Petula Clark, Elvis Costello, Josh Groban, Trini Lopez, Johnny Mathis, and Michael Jackson. Includes a CD with a rare recording by Marlene Dietrich, in German.

4) "Waiting On Charlie." A revealing insight into the artist as told by waiters from a variety of restaurants that Chaplin used to frequent. The men and women in aprons with order pads who saw the famous man at his hungriest. What he ordered, what questions he asked, if he used a knife and fork like the Brits do, how and if he tipped. And much, much more. Includes photographs. 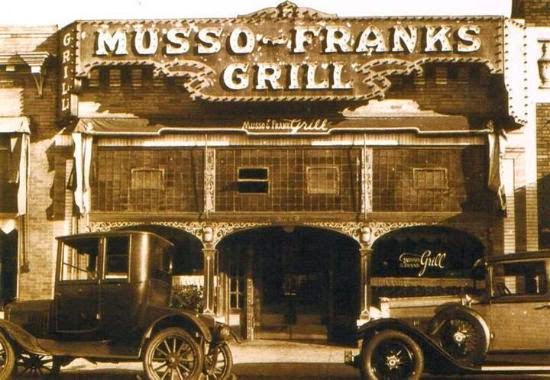 5) "Chaplin: The Tell-Tale Hand." For the first time, the somewhat dubious science of graphology will be applied to Chaplin. His handwriting will be examined, which will reveal the motivation behind his films. It will also define his character, disposition, and attitudes. I will apply all three graphology approaches: integrative, holistic, and symbolic. This book could end up on the bottom shelves next to Weissman's psychological analysis of Chaplin, where it belongs. Still, a fascinating exercise and a possible best-seller among graphologists and mystics. 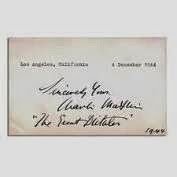 6) "Thursdays With Charlie." Through close examination of his letters, journals, tennis matches, film production schedules, and reservations at Musso-Frank's restaurant, I will document Chaplin's activities for every Thursday between 1921 and 1953. Quick math: That's over 1600 Thursdays. This book is sure to be a doorstop. 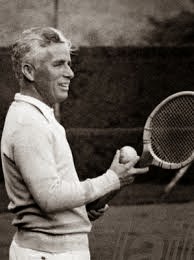 Let me know which book most interests you. I'll be sure to let you know who the winner is, and when the book will be published. I'm already preparing my query letters to agents.

A Special Tribute to Charlie Chaplin on his Birthday

Last night we celebrated Charlie's 125th with a dinner, some Mutual shorts, and lively conversation around the table. "We" were Janet Riehl, Jerry Garrett, Joe and Sharon Delmore, Pam and Jack Beahan, and Mary Lee and I. 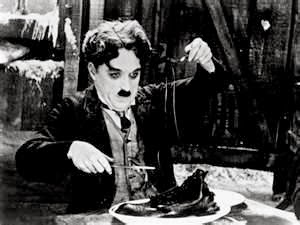 Janet brought appetizers as served in the 1920's, with antique plates from that era (she's a multi-faceted artist)Riehl Life;
I made chicken cacciatore from scratch; Jack brought an absolutely incredible salad; Joe brought shortbread cookies made in England; Jerry contributed his delightful observations and sense of humor; we had a special cake (with ice cream); and Jack even brought a blackened shoe ala one of Chaplin's iconic scenes. 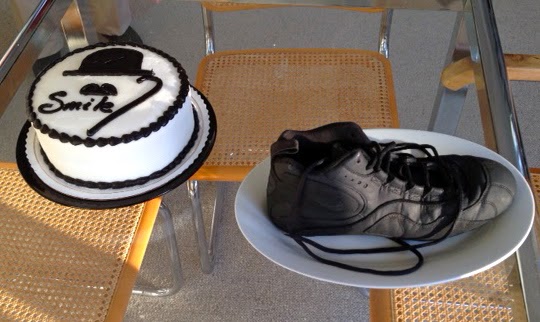 The highlight of the evening, however was a poem written by Pam Beahan especially for this occasion.

Pam is an accomplished poet and, along with husband Jack, a devoted fan of Chaplin. This is the third year in which she has written something for Charlie's birthday.. and, in my opinion, was her most compelling effort yet. She reached deeply into the man and his creation. Here is her introduction, followed by the poem. 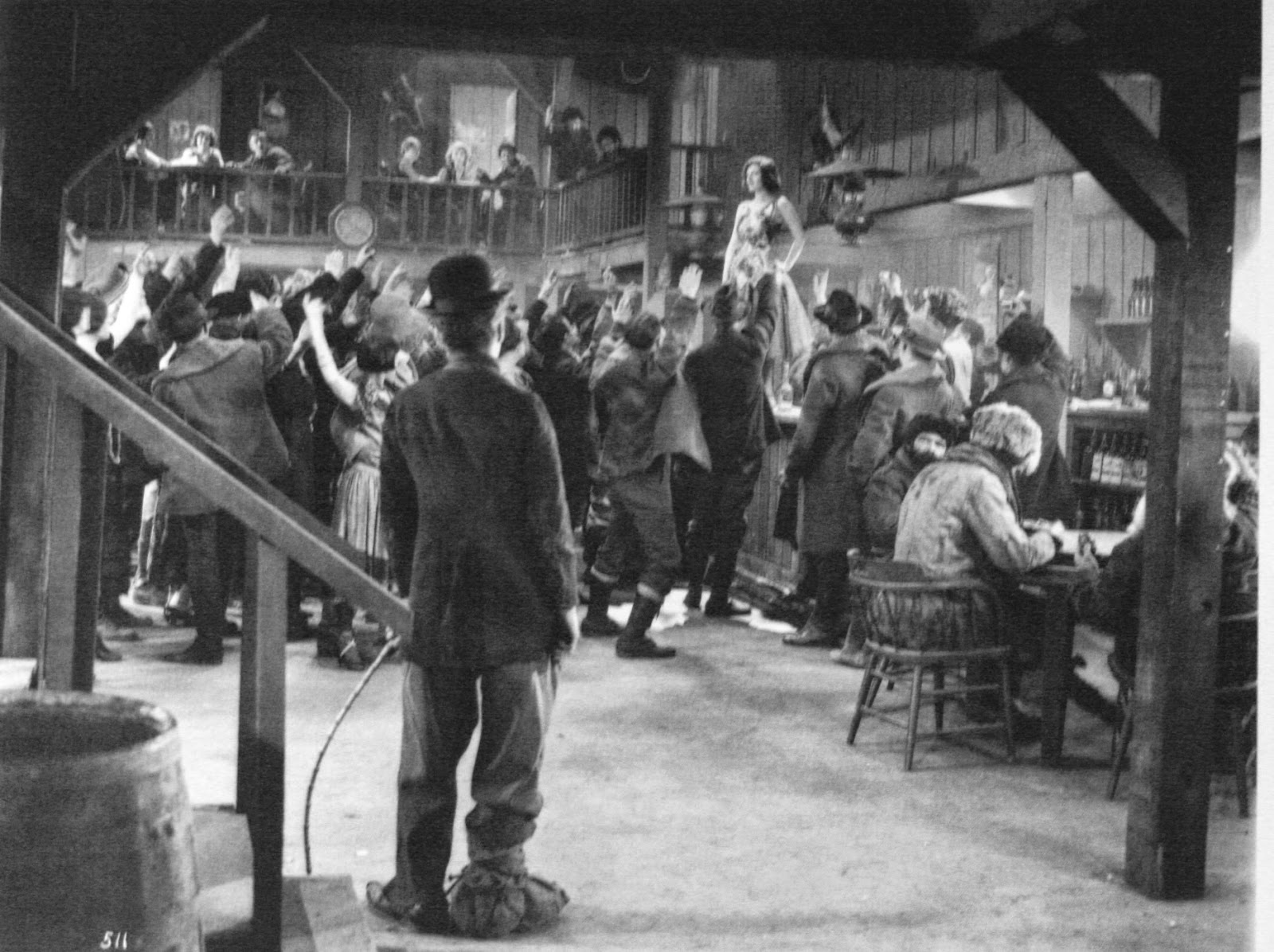 ...in honor of Charlie Chaplin's original 1925 film The Gold Rush,
the film by which he said that he would most like to be remembered.
And to remember his films is to remember him, for he also said that
if we want to know him, we are to watch his films.

Yes, in Charlie's film, gold does abound,
But not just in the frozen Alaskan ground.
No, instead, the most priceless golden treasures here to be found
Are mined from deep within the richest veins
of Charlie's golden heart, soul, and mind.

A battered old shoe from the Tramp's only pair
Breathes life a-new as Thanksgiving fare to thwart starvation,
despite plunging his now-freezing foot into deprivation
But, for him, no gift's too great, no time's too late
From a heart that shines gold, as it warms the cold,
by softly smiling its sacrifice.

At times, a speck of hope touches the Tramp's heart,
and bubbles up and erupts into uncontainable shimmers
that transform his eyes and body into dancing bursts of golden joy.

Other times, as befalls us all, at times,
his hopes, his innocence, and his joy
are swiftly ravaged, plundered, demeaned, degraded and shattered into
sharply lethal shards that catch and tear within his throat, his eyes, his heart, his soul...
And the only speck of gold dust left for him is to somehow struggle to go on...
...with a throat shredded wordless,
...with eyes ripped gleamless,
...with a heart drained nearly bloodless,
...and with a soul slashed soul less.

And yet, the richest gold, the strongest rush, after all, is that, at last,
his worth is seen, his treasure known, his hope replanted, his joy regrown.

At film's end, as we mine what we have seen,
Charlie's golden gifts can warm our own brightening souls
where we can search today, tomorrow, and yesterday for golden treasures of our own...
For, Charlie once more has shown that we need not rush
to search for some cold and distant gold,
For it's been inside us all, all along. 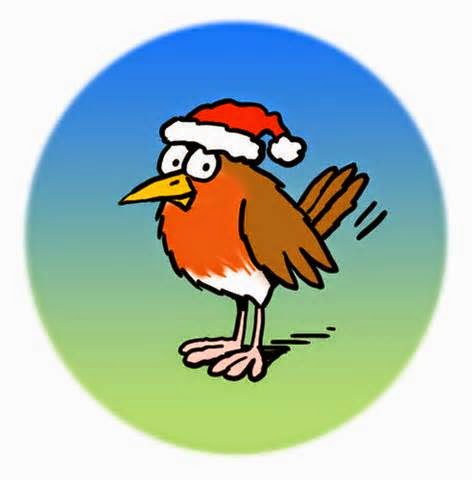 Spring officially began about two weeks ago, at least according to the calendar, so this seems to be an appropriate time to talk about birth, rebirth, and celebration.

Birth: Charles Spencer Chaplin was born on April 16, 1889. His father was Charles Chaplin Senior; his mother, Hannah Harriett Hill. They were music hall entertainers, they moved around quite a lot, they kept incomplete records. The result is there is no official record of the birth of the man who would eventually conquer the world with laughter.

Birth: The character of The Little Tramp was born one hundred years ago, in February, 1914. The film was "Mabel's Strange Predicament" with Mabel Normand, one of Charlie's earliest films for Mack Sennett at Keystone. It would take several more films, however, before The Tramp character would be fully realized. And that's the character that captured the hearts of people around the world.

Rebirth: There have been many Chaplin impersonators over the years. There are many today. I want to tell you about one young man I've met through the internet. His name is Jason Allin. Jason Allin's website 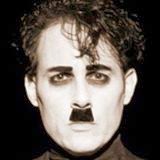 He lives in Innisfil, Ontario, near Toronto, and he first contacted me after reading about my novel. Here's the short version of what's going on with him. He's made short films as Chaplin, performed in a one-man show on stage about him, and is currently planning a trip to Adipur, India, for Chaplin's 125th birthday celebration. He will be making a documentary about the festivities there.  He was interviewed - via Skype - by the New York Institute of Technology in Old Westbury and Manhattan. Their film and television program is paying tribute to Charles on his birthday. (They also Skyped me the other day) He is booked for a showing of his movie in Ontario for the 2nd Annual International Comedy Festival.He has other Chaplin-based projects in the works. Yes, a busy and talented young man.

What's going on in India? Celebration. The entire town celebrates Chaplin's birthday, as they have for the past 40 years. I wouldn't have believed it either, until I saw pictures of it. Here's a link to a CBS item about it.
Chaplin celebration in India 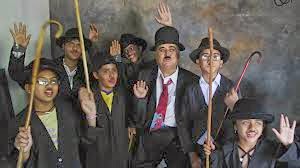 Jason is trying to raise funds to help pay for the trip to India for the documentary. If you have a few extra quid lying about, consider helping him on his quest. Kickstarter for Jason Allin to India

The Celebration of Chaplin will continue throughout the year, around the world. One of the highlights will be a gathering in Bologna, Italy, in June to celebrate the 100th anniversary of The Little Tramp. Almost anybody who's connected to Chaplin and his legacy will be there. They include two of my personal favorites: David Robinson and Kevin Brownlow, two of the most respected Chaplin experts in the world. If you want to put in a few hundred quid or lira for me, I'll go too. I accept personal checks. Chaplin in Bologna 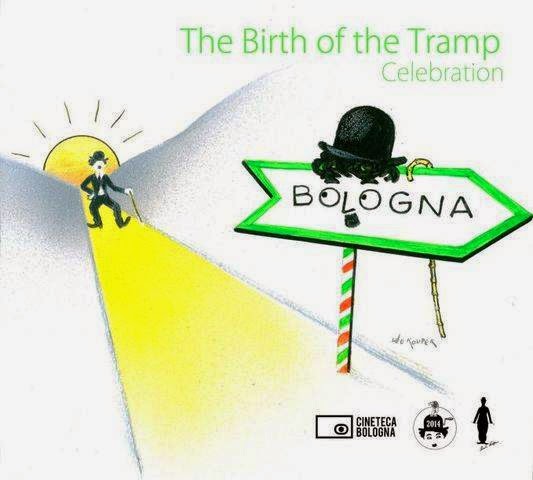 If you're a Chaplin fan, 2014 will be a marvelous year. Proof that his star shines as brightly as ever.

Posted by Gerry Mandel at 8:46 AM No comments: