Time for a Chaplin Statue

Two situations came together for me recently which tell me "it's about time."

The subject is a sculpture of Charlie Chaplin. In the United States.
Now you'd think there would be an appropriate statue of him in bronze somewhere in this country, but you'd be wrong. At least as far as I can tell. Certainly, there would be one in Hollywood, a town he helped create. They do have a bas relief of him on Hollywood Boulevard in front of the Hollywood Entertainment Museum. 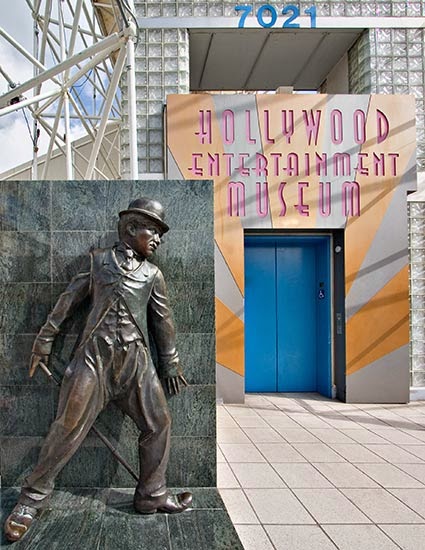 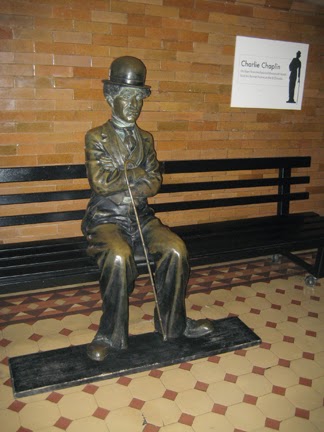 There's another one of him across the street, in the lobby of the Hollywood-Roosevelt Hotel. It's a life-size Tramp sitting on a bench. And that's it.

About those two motivating events I mentioned:
I was talking to a friend of mine, Harry Weber, an accomplished sculptor with installations throughout the U.S., Europe, even Africa. He's currently working on a bronze statue of Elvis, to be placed in Springfield, Missouri. Don't ask me why Springfield. I didn't ask. Harry has created sculptures of Chuck Berry, Bobby Orr, 8 or 9 St. Louis Cardinal Hall of Famers, Doug Flutie, Tennessee Williams... the list is long and varied. You can see what I mean at Harry Weber sculptures

I'm not trying to drum up business for Harry, though I'd love to see what he could do with Chaplin. I'm just trying to figure out why there is no significant sculpture of Chaplin, when so many other celebrities and non-celebrities have been immortalized in bronze. Harry says it is usually an individual that steps forward to initiate a project. So it seems no one has done that on Chaplin's behalf.

Which brings me to event #2. 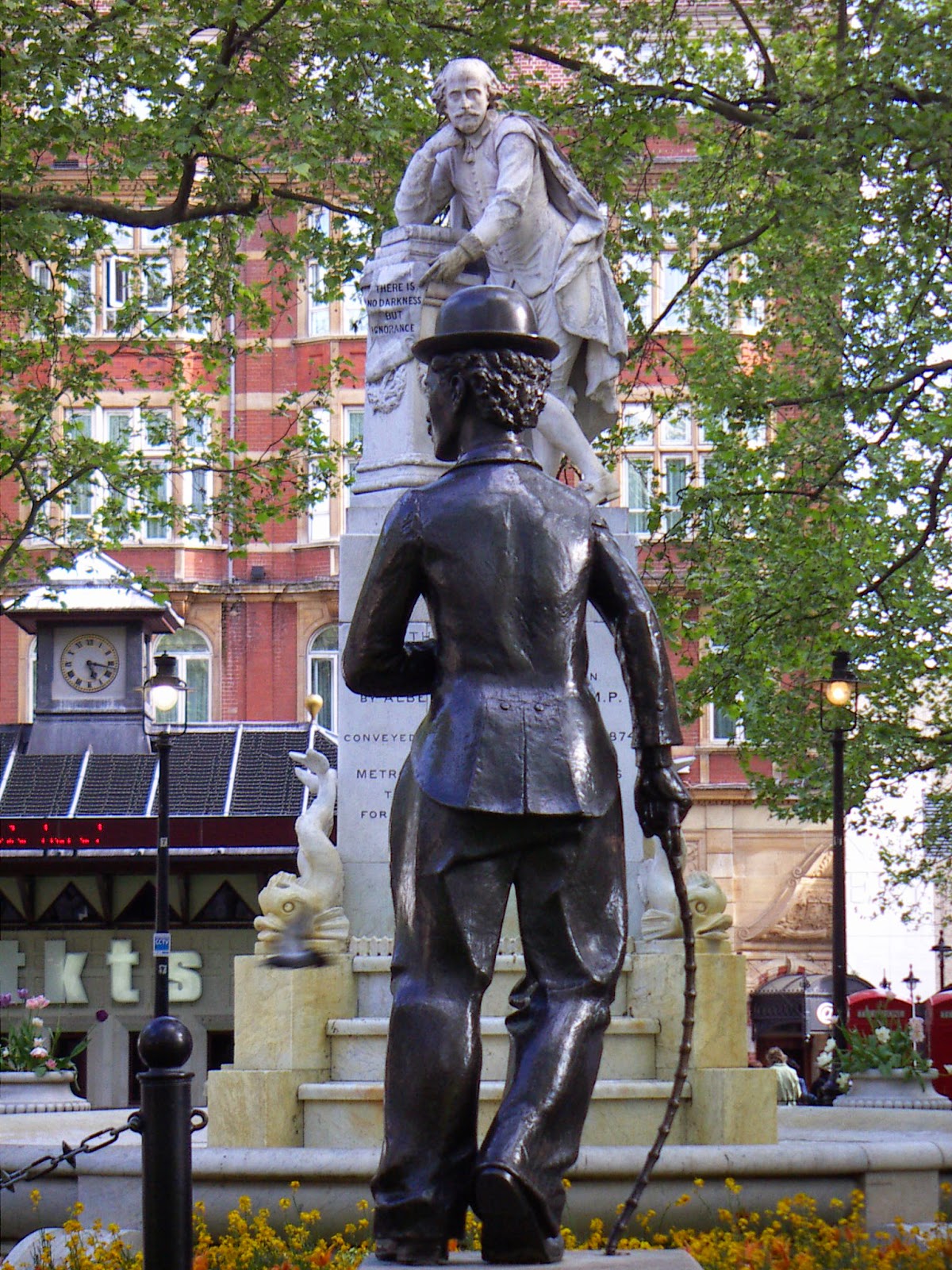 The scene is London. Today. Thanks to my friend Carl Sturmer, I've learned that the British honored Chaplin with a sculpture by John Doubleday in 1981. Originally it was in a place of honor: across from William Shakespeare in Leicester Square. Quite a duo, Will and Charlie. Covers a wide range of creative excellence that originated in London. Even though Chaplin's career grew and flourished in Hollywood, his roots were deep in London.

Due to a major renovation, Charlie was moved to a side street, about two blocks from Will. Carl tracked it down and took these photos. He says, "I was really sad when I saw it standing there. Despite it all as I loitered for a few minutes people still stopped to take their picture with him. Nothing can kill his legacy." 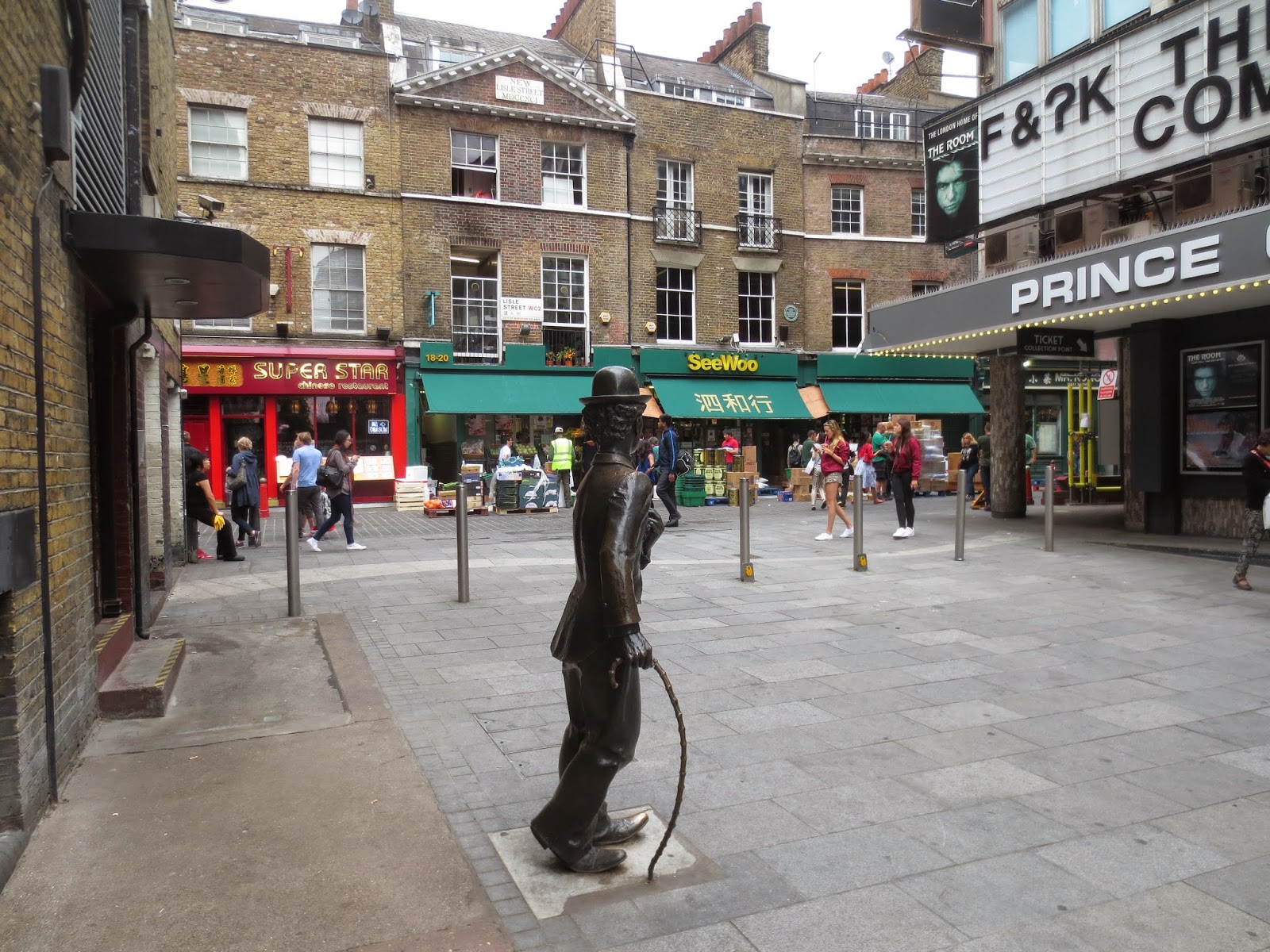 Here's the World View on Chaplin sculptures. It's probably more comprehensive than you imagined. There are sculptures of Charlie in Alassio, Italy; Merida, Venezuela; Shanghai; Vevey, Switzerland; Waterville, Ireland; the Czech Republic; Hyderabad, India, and a couple of more.

So I say, "It's about time." For the United States to honor one of its greatest film artists with a magnificent sculpture in a place of honor. In Hollywood. That's where it should go, I believe. In a significant location. There are lots of folks in Hollywood (and Beverly Hills and Malibu and Bel Air) who could write a check tomorrow for this and not even notice the cost. There are lots of folks who probably owe at least some part of their success to Chaplin's accomplishments and ideas. Maybe I'm biased but I can't think of any other individual who so much represents what the legacy of movies and Hollywood is all about.

I'm not experienced at starting grass roots movements. But I'll try. You can send an email to Mayor Eric Garcetti of Los Angeles. Just tell him about this timely idea for a Chaplin sculpture. You can mention that 2014 is the 100th anniversary of the birth of The Little Tramp, and it happened in Venice, California. There's no better time to initiate this project. 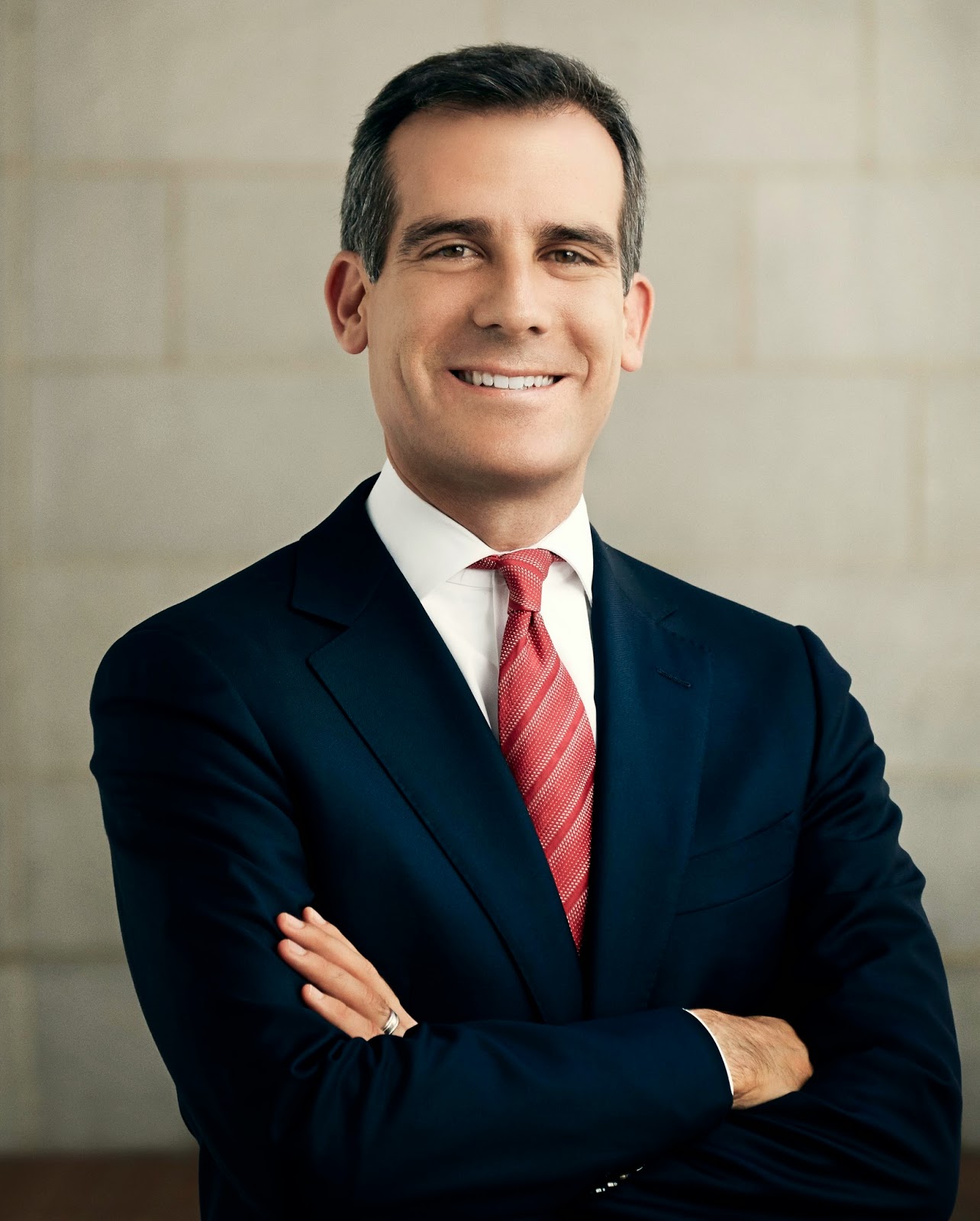 mayor.garcetti@lacity.org
Also, you can drop a note to the LA Times.

If this works, I've got a terrific idea. We'll all meet in L.A. for the dedication ceremony, followed by dinner at Musso & Frank Grill, a landmark on Hollywood Boulevard dating back to 1919. It was one of Charlie's favorite restaurants. I'll pick up the check...for the food...not the airfare. See you there. And thanks.
Posted by Gerry Mandel at 9:14 AM No comments:


At this time, one month after my previous post, I had planned to give you an exhilerating report on my trip to Bologna for the big Chaplin celebration there. In fact I had all kinds of plans to upload photos of me with David Robinson, Kevin Brownlow, Lisa Stein Haven, Claire Bloom, Michael and Victoria Chaplin... the list is long and impressive.

Unfortunately, the day before I was to leave, I decided to take my two Golden Retrievers for a hike in a nearby park. Not a big deal really. My wife, as I was about to leave, said "Better stay off the trails. We've had a lot of rain and they'll be muddy."
"Sure," I said. "Good idea."
I got to the park, saw that the meadow was soaked, not a good place to let them run, so I decided to take them for a short hike on the trail. The rest is too painful to spell out, so I'll cut to the chase. I slipped going down the trail, bent my left leg at an impossible angle behind me, kind of like one of those NFL slo-mo injuries in process, and ruptured my quad tendon. Quick cut to the emergency room (this was on a Sunday), sent home for the night, back on Monday morning for surgery.

In fact, about the time I was being wheeled into the OR, my Delta flight was taking off from St. Louis, headed for NY, then onto London and Bologna via British Airways. For the rest of the week I spent a lot of time in bed, leg in an unbendable splint, trying to follow what was happening in Bologna through email and Facebook.

Thanks to my good friend Mike Vogelle, I got some idea of just how special this gathering was. These photos are by, and of, Mike. He has many more on his Facebook page. 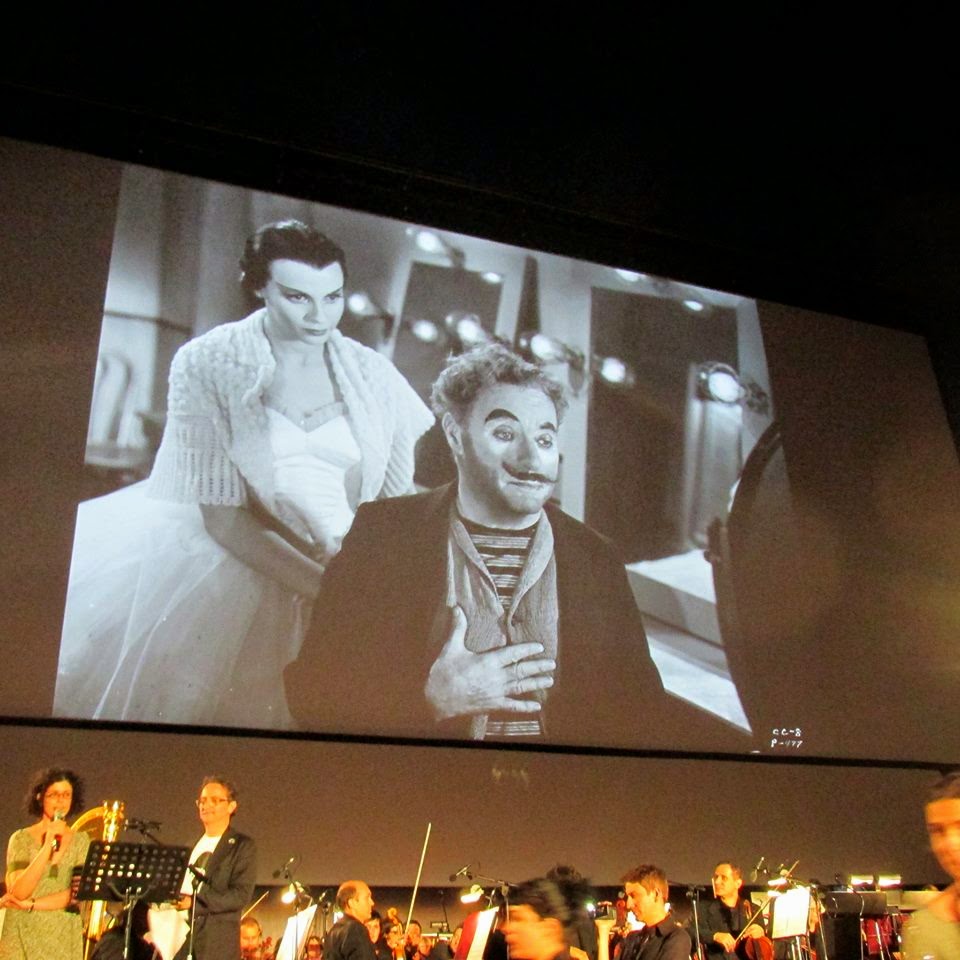 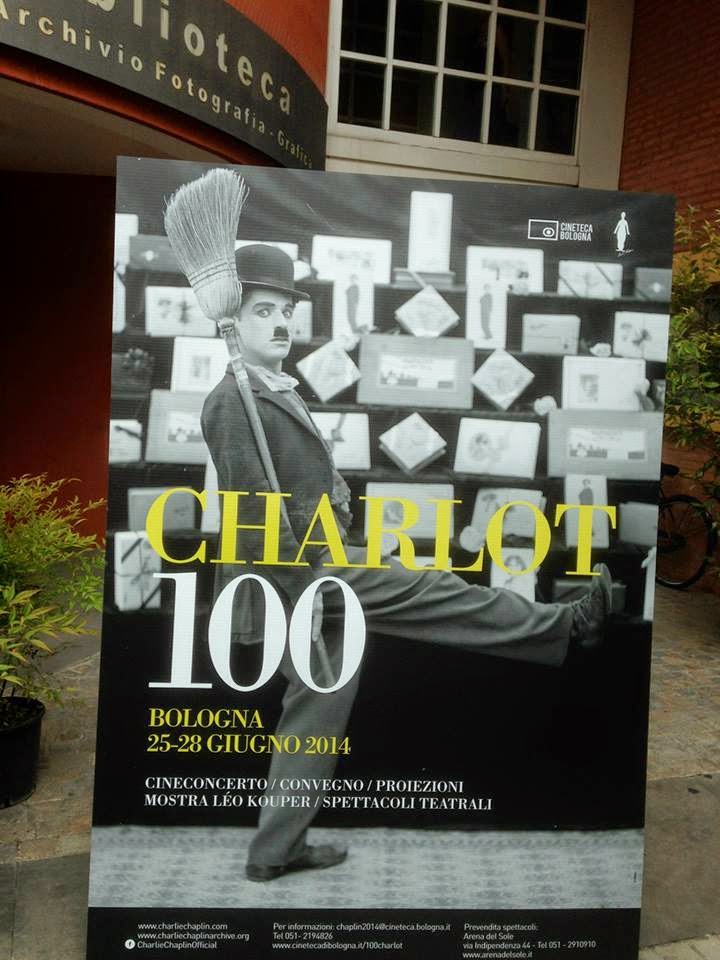 Thanks, Mike. And thanks to Lisa Stein Haven for additional updates, inputs and invaluable insights.

Class, what lesson did we learn today?
First, life is what happens while you're making other plans.
Second, I'm not invincible.
Third, I must listen to my wife more attentively.
And finally, when life hands you lemons, write a blog, a short story, a novel, a play.
So I've got this idea for a novel. About a guy, a devoted Chaplin fan, who has an accident and can't get to Europe for a big celebration for the Little Tramp. So Charlie visits the guy at his home in St. Louis and they spend some time together, here and in London and in Hollywood, present and past.

Wait a minute. That sounds familiar. Back to the keyboard.

Congratulations to all those who helped make The Little Tramp at 100 such a big success. Hopefully I'll make it to Vevey whenever the museum opens. No hiking with dogs to be scheduled then.